Shopping for an RV

Jeff and I subscribed to an RV rating service: www.rv.org, mostly because it helped us narrow down our choices. I was surprised to see that there really are not many motorhomes that get good reviews. Here is the list of brands and models with three stars and above we get to choose among:

I've already spent a fair amount of time searching for RVs on the internet. In typical Sharon fashion, I have assembled a spreadsheet and binder to compile my findings. =) The Triple E's are mostly non-existent, I've only found one and it was way too expensive, same with the RoseAir. It looks like it's probably going to be a Newmar. We also don't want any motorhomes that are older than 2002, as we're looking at having to resell in 2010 and don't want to have a motorhome that is 10 years old by then. Ideally, we are looking for something that is from around 2003 to 2007. We don't actually want a new motorhome because they typically come with manufacturing problems, and many of the manufacturers are going out of business, and we won't be sure of being able to collect on the warranty repairs.

We actually went and looked at a Scottsdale locally, but the price was too high for the lower end model. What I'm hoping to get is a Dutch Star, but we may not be successful in our time frame. The Dutch Stars originally sold for over $200K, and our budget won't go above $80K (we'd actually like to keep it under $60K) so that may be too much of a discount this close to the beginning of the depression. Anyway, I have been scouring craiglist postings along the west coast, and hope to find a good deal between now and March. The picture is of the interior of a Dutch Star with the cherry wood.

I think we'll really start looking seriously in March. Though, there's a fairly good one in Portland right now, so it's tempting to jump in our car and head up there (and get to attend AnTir's 12th Night), but both Jeff and I have colds from Christmas, so it will just have to wait.
Posted by Sharon Kwilter at 1:44 PM No comments:

Email ThisBlogThis!Share to TwitterShare to FacebookShare to Pinterest
Labels: RV

Okay, I'm having problems posting pictures the way I want, so I'll try again on the quilts...

The purple quilt is for Veronica and it's animal themed.  It's also all done and ready for quilting (which I'll probably hire out).  It has a complicated border, not pictured here; I don't have a space large enough to lay it out and take a picture right now. (Too many boxes strewn about in the sunroom and living room.)

The blue and green quilts are for Daniel and Thomas and are transportation themed.  (I forget which likes blue, so I guess they'll figure it out.) The green quilt is all pieced and ready for the border, the blue quilt is still residing on the floor of my library while I wait for a new iron I've ordered online.

I figured that making them all the same pattern, there would be less fighting... 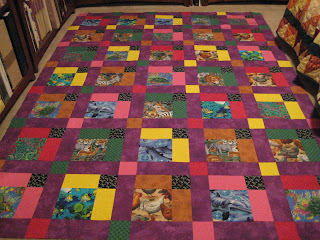 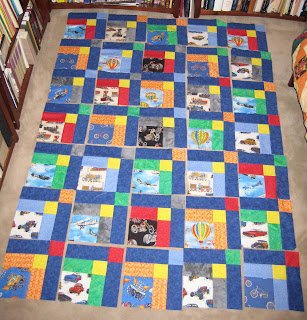 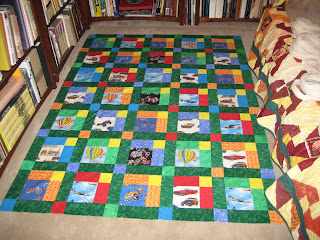 Once I'm done with these quilts, then I'm going to make two small lap quilts for Jeff and I for the trip. Mine will, unsurprisingly, have dragons. His will be tool themed. I've already cut mine out and I'm just waiting for that iron...


Jeff has decided to design some complicated Fibonacci fractal design. It's mostly squares, but will still be quite some work to assemble and piece. I'll let him add more on his pattern.

And, if there's time before we go, I'll finish a quilt I started a couple years ago for the bed in the RV. It's the purple and yellow one Jeff mentioned on his blog. I'll add pictures at some point when I can get them from Jeff's computer or when I pull it out again to work on it.  But that project will be easy to move unfinished, so it's not a huge priority.  We can probably use one of the 6 quilts we already have.
Posted by Sharon Kwilter at 11:56 AM 3 comments:

Well, Jeff is obviously too busy to keep up a blog about our trip, so I guess I'm going to...if I can figure out this newfangled technology.  =)  This may be a long entry, as we've been very busy.
To catch all of you up, Jeff and I are planning to uproot once again in May and spend a year traveling the United States.  Our rough plan (very rough at this point) is to cross across the top of the U.S. in summer, work our way down the east coast in fall and then spend the coldest part of the winter in Florida, and head back across the south in late winter, arriving back on the west coast about a year after we left.  Then, Jeff has promised we will buy a nice house to settle down in.  (Actually, I'm having a hard time waiting...  I torture myself regularly, poking around the markets we're thinking about.)
Anyway, we came up with this plan about two months ago. Afterwards, we mapped out the schedule between then and May when we planned to leave; there were only 22 weekends. They've mostly flown by so far, but we have managed to get some stuff done. The main priority has been to finish projects. One weekend we cleaned and touched up the mosaic patio furniture (and SCA stove) and then sold it. (sigh...I loved that set.) We have begun sifting through the garage and sold a number of SCA-related tools and also the bungalow door collection I had built up. (We had been planning to build a house...long story.) 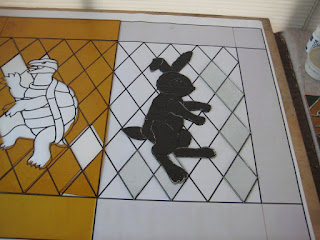 We spent a weekend working on stained glass projects. We still need at least another 3 days to get our project done (due to how large it is). At the rate we're going, I suspect we won't make it, which will be a pain. I don't know how we'll pack a half-finished stained glass project.
I've also refinished a sofa table that I was going to sell, but now we've decided to keep.  In fact we've moved it into the living room, and taken out some of the other furniture in there. Our living room was just too cramped and now we have room to walk about.
For the last two weeks I've been on a quilting binge. Back in 2005, I bought materials to make quilts for my brother Jeffrey's sons, Daniel and Thomas.  I pulled out the plastic tub a few weeks ago to take a look. At the time, I decided I would either have to make them, or abandon the project and sell the fabric; I guess I decided to make them. Of course, my brother Jeff just had a daughter this year so I had to come up with a quilt for her. In the pictures, the blue and green quilts are for the boys, the girl gets purple.  =)  The boys' quilts are transportation themed, Veronica got animals. I tried really hard to use fabrics I already had, so I only bought the blue fabric for the borders and a small piece of brown for Veronica's quilt. Under $20, not including the quilting so far. The purple quilt is now pieced and ready for quilting. The boys' quilts need borders, but I'm still debating about what to do. The border I used on the purple quilt took an entire day, so I'm thinking about simplifying it for the other two. On top of indecision, my iron died. You really cannot quilt without an iron, so I've had to suspend sewing efforts while I wait for a new iron to get shipped. The intermission was nice, but I'm ready for it to arrive already!
I was really impressed to receive 20 plastic file boxes from Staples yesterday morning shortly after I got up, especially since I had just ordered them the afternoon before. My goal with these tubs is to repack (and sift) all of the cardboard office boxes we have lurking around our house. I'm thinking plastic tubs will survive long-term storage better than cardboard. So, yesterday I had the pleasure (and some sadness) to sort through old letters, high school mementos, and artifacts from our wedding. We also bought a DVD binder for our movies and have started pulling them from their cases. But, surprisingly, we found we need a second, so more shopping is required for another DVD binder.  Back to Office Depot, I guess.
I've started investigations into our household storage options. Our current plan is to buy a used insulated container, fill it, and then have it shipped up to Oregon for storage, then when we know where we're going to live, then we'll deliver it to the new house, and then we'll have to sell it. But, we may also use some moving service, depending on the cost, because I'm concerned about our container sitting out in the weather for a year and it may be less expensive to "rent" a container for a year. We'll see. More on that when we figure it out.
Posted by Sharon Kwilter at 10:41 AM No comments: