We are really happy to be vaccinated! Jeff scheduled a BBQ for this past weekend so we spent the last couple of weeks sifting and cleaning the many piles of junk that had built up over the past year of being quarantined. I didn't really take much in the way of photos because the room themselves have not really changed; they're just cleaner.

We took two loads of trash/recycling to the dumps and dropped off one load at the charity shop. I still have one big pile of textile recycling building up on the front porch. I still have to finish sifting before I call them to pick up the pile.

We've had some wonderful weather and it was great to be able to entertain out in the backyard over the weekend. The hidden garden has been lovely and we got lots of compliments from friends that had never seen it. 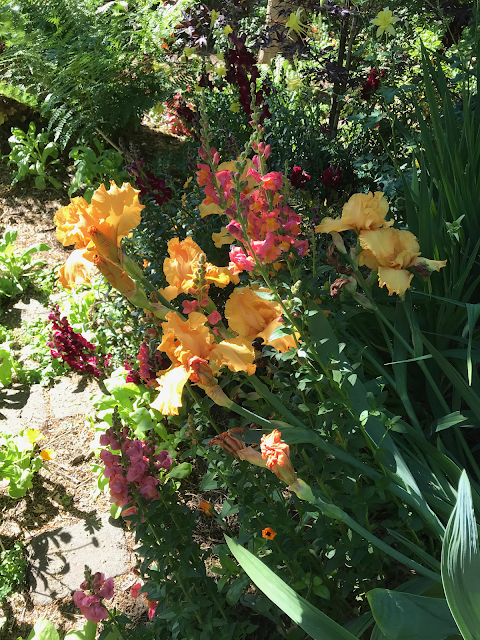 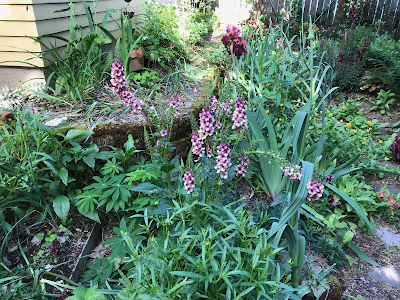 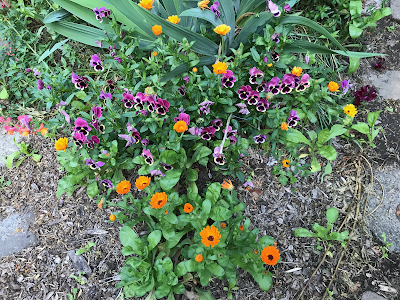 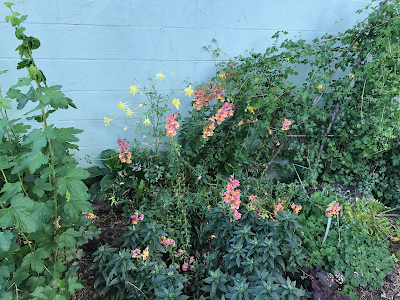 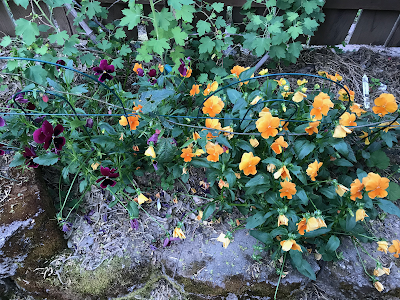 We'll likely spend quite a bit of the summer visiting friends we have missed for the past year and doing day trips throughout this lovely state. The pandemic really helped us appreciate the ability to get out of the house.
Posted by Sharon Kwilter at 10:46 AM No comments:

With no range in the kitchen, Jeff was motivated to pull our old camp cooker out of the shed. It was a lovely day to do some outdoor cooking. 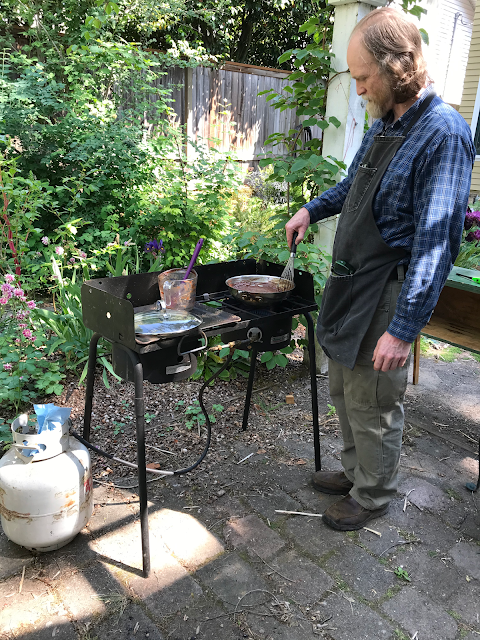 This past week, he also finished gluing up the small stools we made out of scrap shiplap siding last fall. 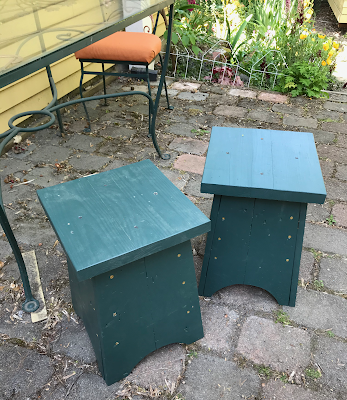 It was originally delayed because we were trying to figure out how to make them more durable than the original stools which were simply nailed together into end-grain. Then we got distracted (as so often happens). Finally, Jeff decided to cut some small pieces to go into the corners so he could screw into both edges. 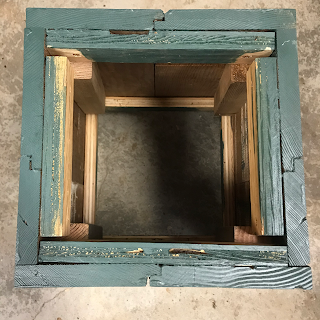 We found some neat clamping straps to use during glue-up. 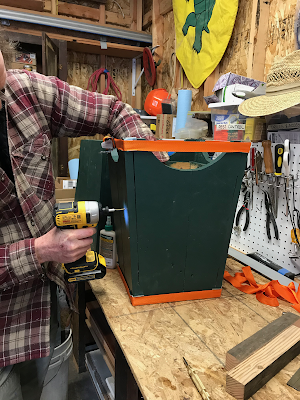 Finally, another project checked off the ToDo list. Now I just need to get the motivation to finish the back stairs. LOL

Posted by Sharon Kwilter at 4:21 PM No comments: 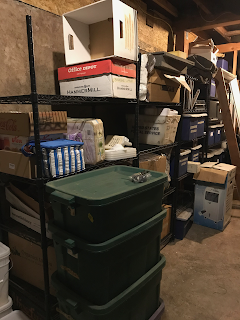 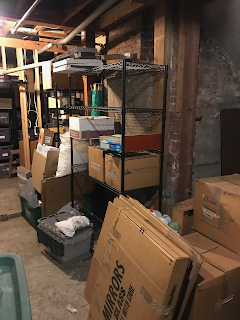 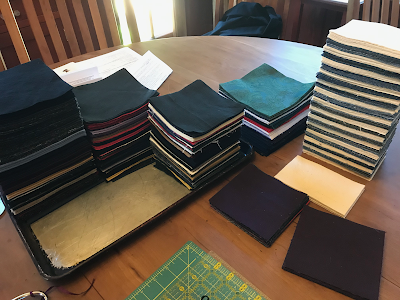 Posted by Sharon Kwilter at 8:00 AM No comments:

With all the drama in the kitchen, I never got around to posting about my closet progress. It is finished! And I have unpacked ALL the clothes!
I thought I remembered downsizing my square dance clothes before I packed them up originally, but I clearly still have way too many. That bottom rod is crammed full and I'm worried there is too much weight on there. I will definitely need to disassemble some of the skirts to make quilts, or start dancing again. =) 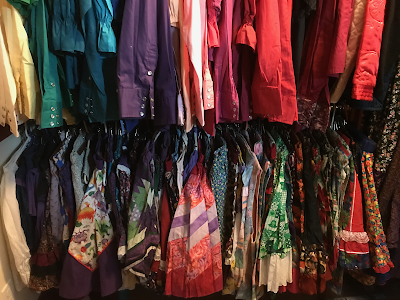 I'd forgotten about some of my really beautiful medieval costumes. I definitely need to try them on and see if they'll fit me again.
Posted by Sharon Kwilter at 7:28 PM 2 comments:

Yesterday evening, we had a bit of excitement. Jeff put on a pot to boil for dinner and the range started on fire. He didn't notice immediately because he had left the room. After a few minutes, the kitchen filled with smoke and all the smoke alarms started going off.

Jeff thought it was perhaps a leak in the gas line that was burning, but we couldn't find the shutoff to the range and when we couldn't figure out how to turn off the gas to the house, I called the Fire Dept. They came within five minutes of the call and finally extinguished the last of the fire in the range and turned off our gas for us. Our Blue Star Range is kaput, poor thing. 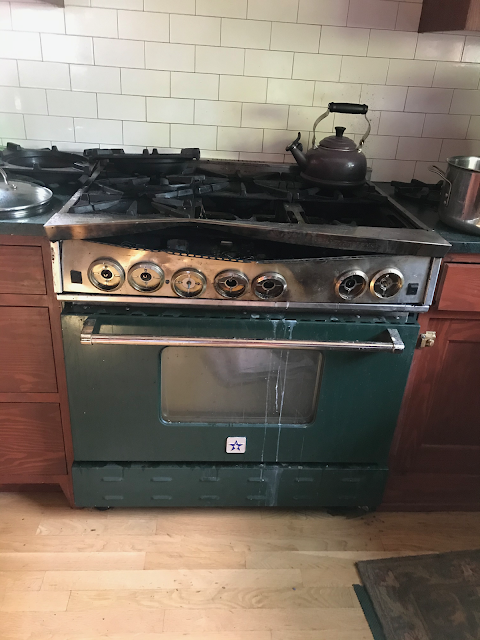 I am so thankful we only lost the range. While it was happening, I had visions of our whole house bursting into flames. Beyond the range, the only "damage" is a fine layer of soot on everything the smoke touched. Jeff and I have spent a couple hours cleaning up the soot, but there is still plenty left to clean.
Today, obviously, I was compelled to do some shopping for a replacement range. We've been talking about getting an induction range for "the next house." This obviously, gives us the chance. If I was not picky, I could have bought a Wolf 36" Transitional Induction Range and it would be installed by the end of the week. But, alas, I am picky. Very picky. I just don't want a stainless steel range in this kitchen.
When I discovered the Ilve Majestic II 36" Range had an option for induction burners and came in Emerald Green, we had to track one down to take a look. 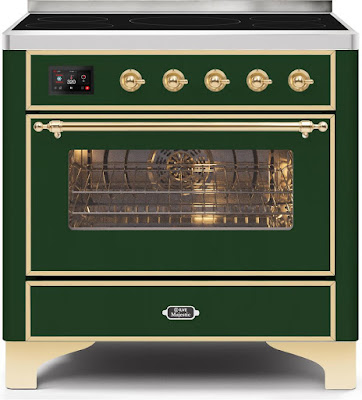 Unfortunately, it will take up to 14 WEEKS to arrive. Despite the horrific wait time, Jeff and I decided to order this range so there is a good chance we will not have an operating range in our kitchen until the end of August. I guess there will be no canning this summer.
Luckily, Jeff does a lot of cooking with the Instant Pot. And perhaps we'll finally get some use out of our new-last-year BBQ. 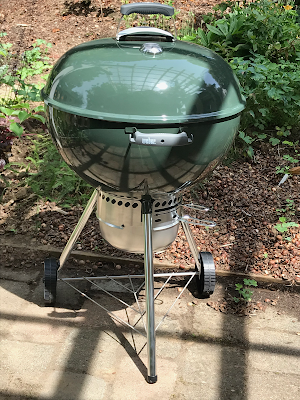 Our front planting strip got crushed in February when our neighbors moved in. Many of the plants died, but I've been surprised by the flowers that managed to survive and bloom. Here it is last week. There were still a few purple tulips that bloomed, the peony surprisingly managed to survive and one of the irises sent up a flower stalk. 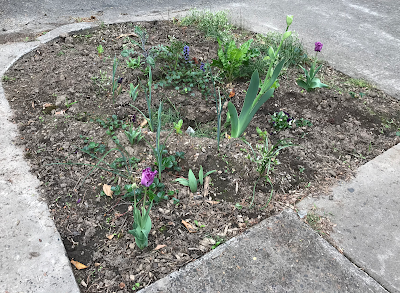 Yesterday, I was totally stir crazy and I dragged Jeff off to Portland Nursery. We picked up a few more plants to try in this bed.
We're trying an Acer circinatum (vine maple) in the center. This time I put two metal stakes on either side of it so even if it's covered in snow they'll be able to see that there is something there. We also bought an Iris tenax (tough leaved iris), Gaultheria shallon (salal), and Mertensia bella (Oregon lungwort). The lungwort probably won't survive since it likely won't get watered enough once it's established. We also moved over another Polystichum munitum (sword fern) from elsewhere in the yard.
We mostly just filled in the deep wheel ruts with steer manure. We didn't spend much time trying to repair the damage. We raked it out a bit and called it good enough for now.
Posted by Sharon Kwilter at 9:30 AM No comments:

I am so excited to finally be nearing the completion of my closet project. Today, Jeff cut down the shelves to the right dimensions and then I sanded the edges and applied edge-banding. I used the pre-glued kind and it was much easier than I was expecting. 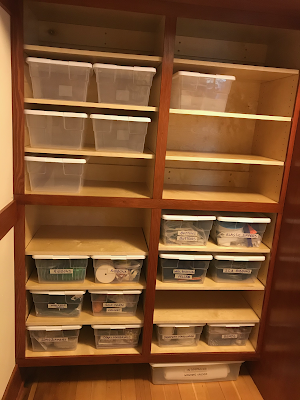 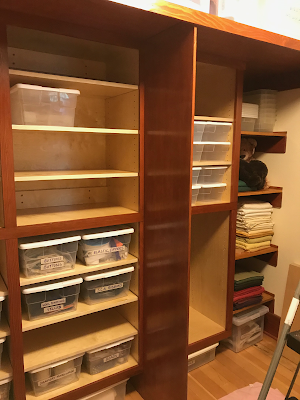 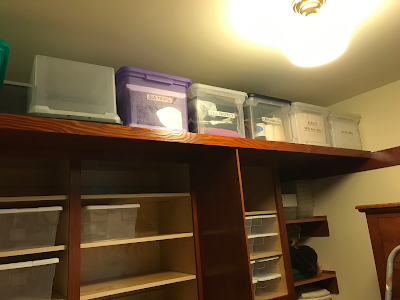 As seems to be typical for this project, I don't have enough shelf pins so I've already ordered those. They'll be here Friday.

Next up, we need to install the closet rods. At this point, it will probably be the weekend before we finish because Jeff gets his second round of coronavirus vaccine tomorrow. Based on reports from friends we're expecting he'll be wiped out for at least two days.

We have really been enjoying our yard this year. Every week there is some new plant to enjoy.


There are so many more photos I could share, but that's probably enough for now. I am so much happier about our yard these days. It was definitely worth the time and energy to make it a place we're proud of.
Posted by Sharon Kwilter at 3:31 PM No comments: