The quilt top made from salvaged blocks is done. I ended up putting a plain fabric border on because when I added blocks with a different pattern, they detracted from the main quilt blocks.
I found a use for the blocks I made for the border. It took about a day to put them together. 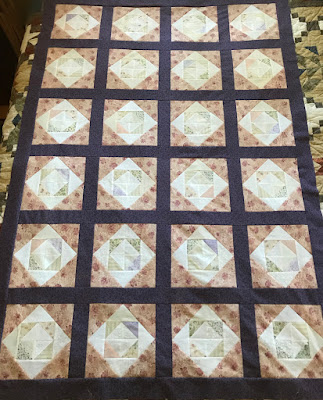 It is a lap quilt size. It is not my best effort, but I'm pretty happy with how it turned out since I never really had a plan and just started sewing leftover bits together.

I can't afford to have these quilted right now, so they'll just get tucked away in a tub and they'll wait until finances improve.

Now I just have one more quilt project kicking around my sewing room: the Queen's Jewels quilt. I'm hoping my motivation will carry me through to finishing that one too.

However, it's sunny today, so I've got to do some shed painting.

I was planning to wait and post photos when we finally finished this project, but with the way our weather has been behaving, I'm not sure we're going to get it finished before next spring. Though, now that I have the windows masked, I am hoping for at least one day of decent weather so I can get those painted too. 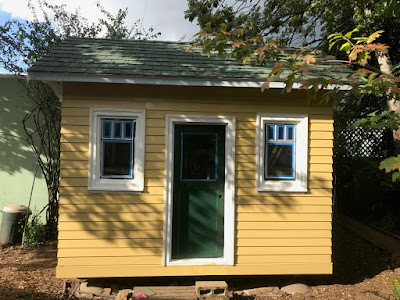 Right after I took this photo yesterday afternoon, before we could even finish cleaning up the painting tools, some random thundercloud came by and hailed/rained on it. I guess we can be thankful that we had finished by then. 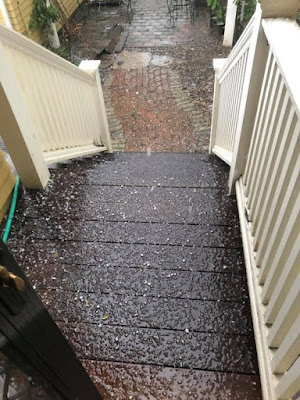 This morning, I went out to survey the damage. It looks fine; the very last thing we painted would benefit from some touchup. 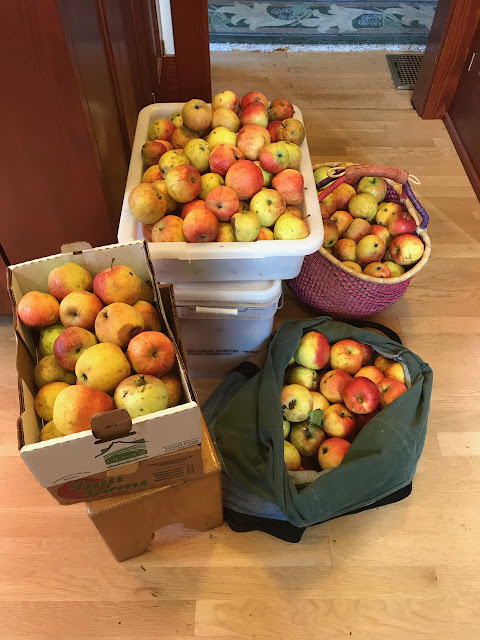 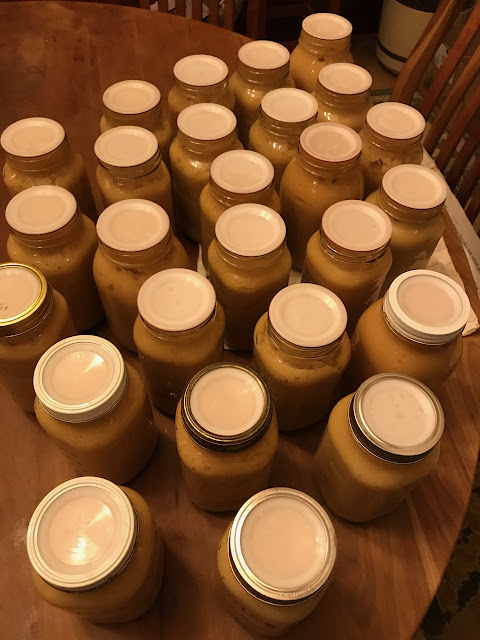 I actually went into my sewing room to straighten it up so I could make a birthday present for Jeff, but I saw these same damn squares sitting there....still. They've been there at least two years. (Nope, longer. Way longer. Since Dec 2015. And April 2016. LOL) I think much of my problem with this project was that I never had a plan. I just started making more squares, figuring I would come up with something when I got close to the end. Well, I never did.

I really tried to make them work for new curtains, but I wasn't happy with any of the block arrangements I could come up with. It didn't help that the two windows were different sizes.

So, finally, I just abandoned the idea of making curtains and I laid out the squares into a quilt and was pleased to realize I had enough to make a decent-sized quilt. It's at least twin size, not including the border. I ended up making 5 more blocks because I wanted to add another row. That task was a lot easier once I knew exactly when to stop. 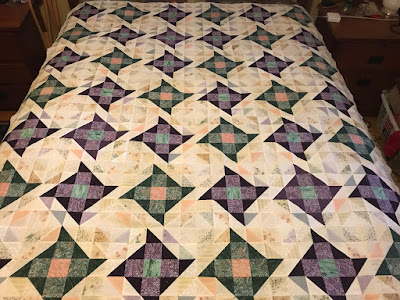 I worked on sewing the quilt all day long. I have to say, it really sucks working with old squares and new squares because, of course, the old squares are a little stretched out from their prior use. And I'm really fussy about making seams match. Sometimes it felt almost like I was gathering. I'm hoping once I wash this quilt, some of the imperfections will go away. 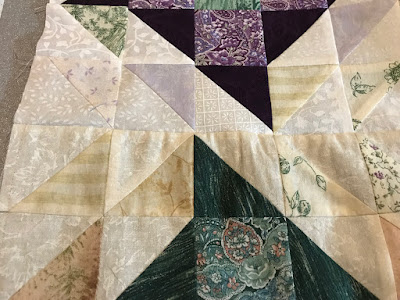 So, my advice, don't do it. But, having gone this far, I was determined to get this project done. So I powered my way through to the end.  I finished assembling them at 11:30PM.

Anyway, the next day I further disassembled the roman shades to reuse the green fabric for a skinny border strip. (I didn't take an edge detail photo yet.)  And you would think I would just cut my losses and throw on a solid colored second border and call it done, but somehow I got it into my head that it would be nice to use up all the extra little bits lying around.

I don't know what I was doing. I just kept making those little half-triangle squares and I have a bunch of them leftover, so now I am trying to figure out a fancier border. So, this project continues.... 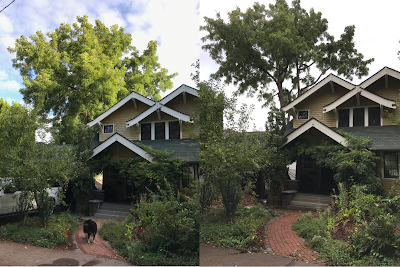 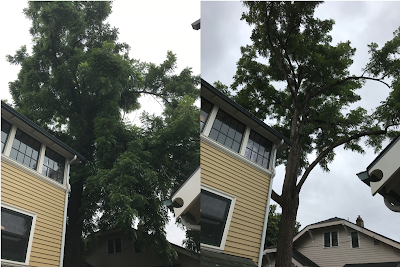 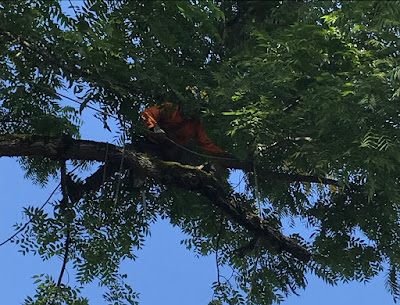 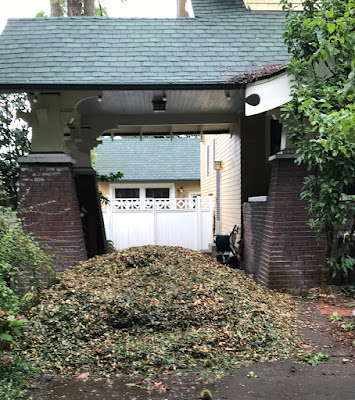 Sigh. Another ugly Portland installation. The city doesn't even notify you it's going to happen; they just show up and put it in. 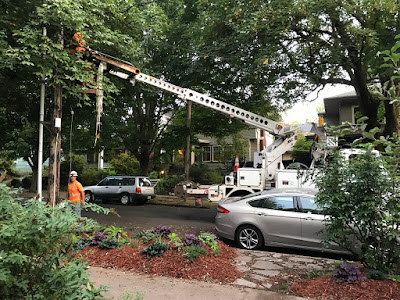 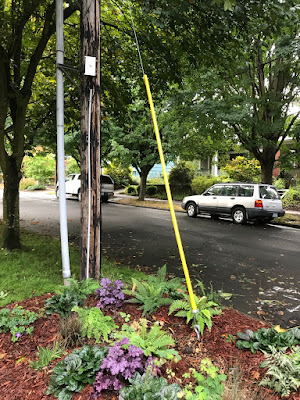 I'm definitely going to plant a vine on it next spring.

I also wanted to remove the massive black walnut tree between the houses in the side yard. It is way too big for the location and tends to drop branches on the roof, but apparently, Portland won't let owners remove trees on their private property once they are more than 20" across. So we are stuck dealing with his huge tree and paying $1500 pruning bills every five years or so.

After four days of rain and thunderstorms, today the weather was pleasantly cloudy and dry. It was still too damp to resume painting the shed, but it did give Jeff and Aaron a chance to resume work on the Hidden Garden. They finished setting the stepping stones in sand. It's a pretty informal path as we just used whatever pavers/stones we had leftover in piles.

They also put in the pad for the bench. We had this chunk of urbanite hanging out in the driveway and it proved to be the perfect size for the bench. 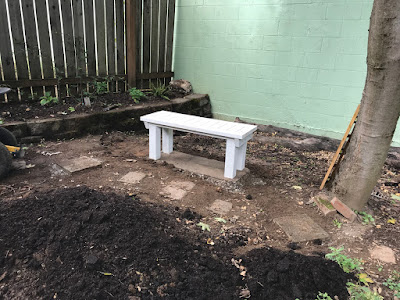 We have realized we're going to have to paint the bench a darker color because there are always little muddy footprints on the white stain. Bailey is quite the little jumper.

Then they finished amending the soil with many bags of cow manure and double-digging most of the planting beds. Jeff also dug in the crimson clover so it would serve as green manure.

We managed to get the most critical plants in the ground (i.e. bareroot bulbs), but it was a long day and we were tired so we called it quits before all the plants made it into the ground. Hopefully, the weather will still be nice enough tomorrow to finish. 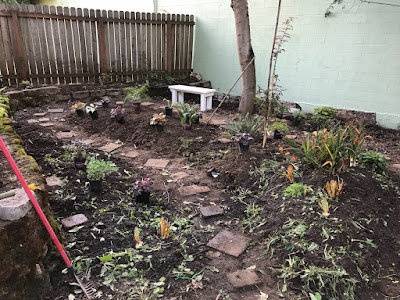 I had worried I'd oversubscribed the space with plants, but once we laid them out on the ground, there is an awful lot of empty space.
Posted by Sharon Kwilter at 8:28 PM 4 comments:

Jeff and Aaron managed to fill all the nail holes and do more priming on Friday. I painted the first coat of paint on the door. 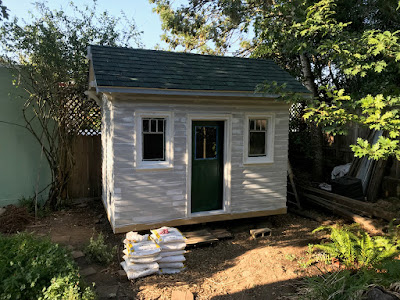 Since it started raining on Saturday, we didn't get to start putting the paint on. Instead, we did a bit of garage organizing.

I managed to clear off the big workbench and sanded off all the marks and sealed it with two coats of the Daly's Seafin' Ship'N Shore leftover from the planting table. 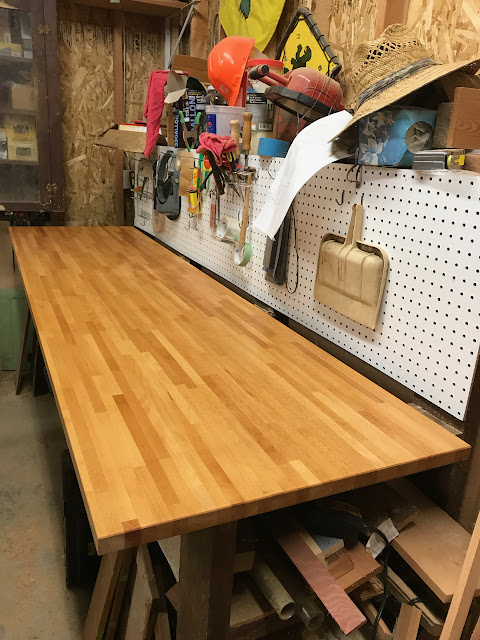 I've spent several hours now sifting misc. boxes into the large sterilite tubs and the piles of loose stuff are diminishing. Here is how the garage looks at the end of day today.

We obviously still have a lot of work ahead of us. LOL
Posted by Sharon Kwilter at 6:34 PM 2 comments:

The weather has finally cooled off and we have several days of weather with low risk of rain in the forecast so today—finally—we got to work on priming the garden shed. Once Aaron arrived to help Jeff, I wandered off to my own painting project. 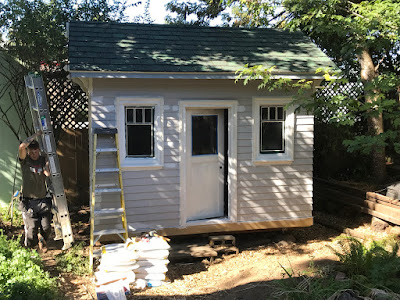 I think unless we get rain, we'll be able to finish painting this by the end of the weekend.

I nearly finished up painting the galvanized iron patio furniture. Jeff wanted more copper on it, so I painted all the cornucopias in the copper paint. I need to do a bit of touch up with green paint, but I'm quite happy with how it looks. 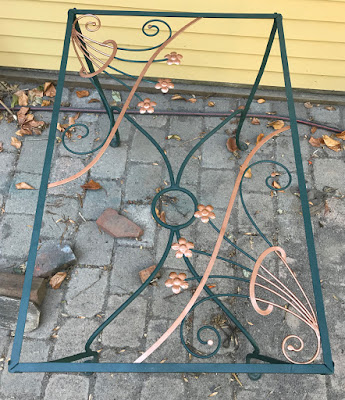 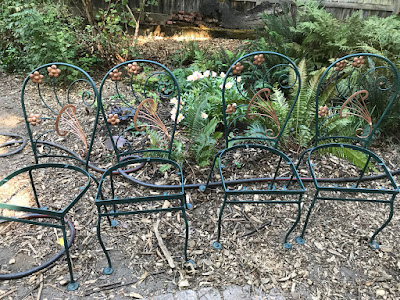