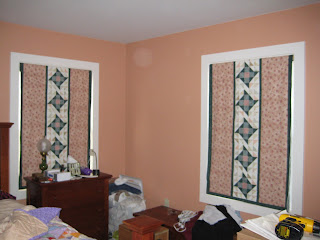 Yeah! We have achieved success in making and installing the master bedroom roman shades! We're pretty thrilled with them, though with the weird window frame, the room doesn't achieve full dark during the daytime, but it's still pretty dark in there. After a somewhat frustrating install, Jeff has decided to check out the nap-ability of the room this afternoon. 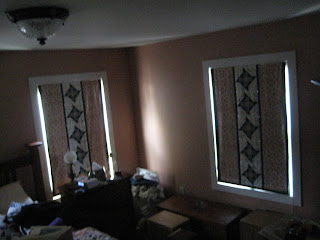 Jeff was a lot of help this morning installing all the hardware bits onto the header and then installing them in the window frames. 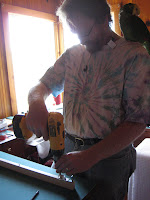 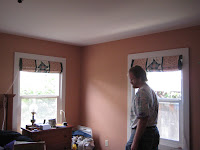 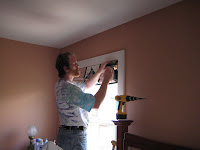 Now I'm trying to decide whether I'm going to rip apart the panels for the sewing room. I've decided I don't like the borders with the print fabric in the corners. And when you take into consideration the full window width and the outside border, I think they would look better with a slightly narrower solid green border between the squares. Then the borders around the outside would be more similar in width. But it's never fun to un-sew something. I've figured out how to finish the sewing room panel to make it tall enough, now I just need to do it.

At this point, I'm sure the sewing room Roman shades won't be done tomorrow. But at least the master bedroom is done. And now we've done all the steps of Roman shade assembly so the second and third bedrooms should go much faster.

Posted by Sharon Kwilter at 1:15 PM