Anya the hen is no more

Jeff just found Anya, our favorite laying hen, in the bottom of the chicken coop dead. There were no signs of trauma. We're not sure what happened. She seemed fine yesterday, so her death is quite a shock.
Anya was actually our biggest troublemaker because she was always trying to get out of the yard and find a better place to lay her eggs or look for better greenery to munch on, but she was also the most attached to Jeff and she would follow him around the backyard. It was always cute to see her running when Jeff called them for their daily scratch.

It's a sad day here and a day of fond remembrances.

Here is her story.

Email ThisBlogThis!Share to TwitterShare to FacebookShare to Pinterest
Labels: Chickens

Well, we're moving at a turtle's pace, but we've gotten started on the fence. We went off last Friday and bought the wood. We bought the wood at Custom Cedar Products and I need to rave about their fabulous service. We went in with our drawings and a materials list. After we'd talked to a salesman for a few minutes, the owner, Chris Bilyeu, came through the lobby and started talking to us. He spent probably 40 minutes helping us and offered some great advice about what materials he would use and how he would construct it. (I was not paid or compensated for this opinion; I just wanted to share the good experience we had in case other folks in Portland were looking for fence materials.) 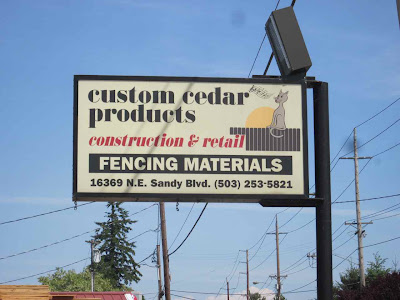 The boards we bought are fuzzy on one side, which I didn't like, so we planed the boards over the weekend. This is the first time we've used our planer. It's a good thing we didn't try and do it inside the garage. That sawdust really flies! 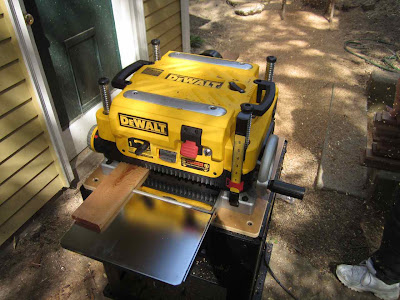 Today, Jeff finished digging the post holes. The walnut tree has some really huge roots in that area. He had to cut one of them—this root was bigger than Jeff's arm. Now I'm trying to decide if I stain first and install, or if we install it then stain. It rained today on the wood, so it may be the latter.

I ran across a blog post today at Hyperbole and a Half that perfectly describes us right now. I wish I could write so well about my failures.
I feel like I owe you all interesting projects to post about but we've gotten a bit burned out. Even though we hired out most of the hard work, the 2+ years of remodel wore on us and our motivation has apparently abandoned us.

That being said, we're having problems with the chickens escaping from the backyard into the front yard and messing up Jeff's garden so we are currently trying to get to work on the side fence. Yes, the side fence we were going to finish in October 2011.

I got together the material list again and wrote for a couple quotes. It is possible we'll start work on this project this week because the chickens are making Jeff crazy. Either that, or we'll be having chicken soup next week (which will make me sad).

I'm scared of saws, I admit that. So, I made myself scarce today when we hired Gordon Linn (360-749-1960) to come out and slice up our cherry tree. He does this for a living and he said this was really beautiful wood.

Jeff seemed to have fun helping. I hid downstairs and popped upstairs occasionally to take pictures. 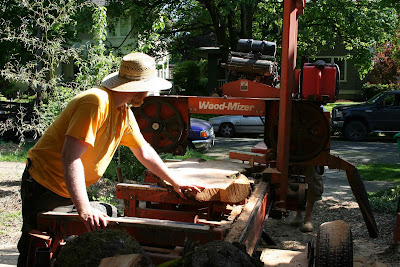 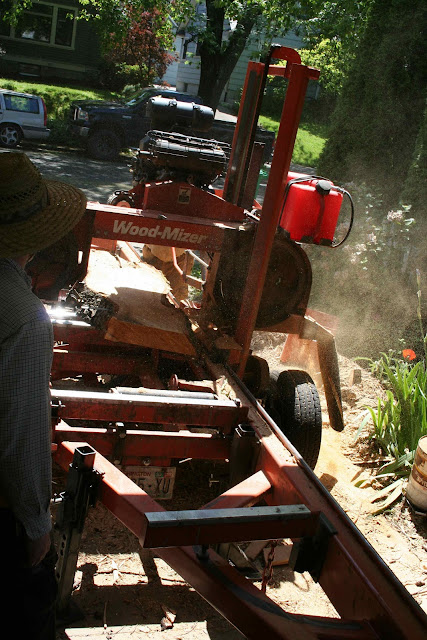 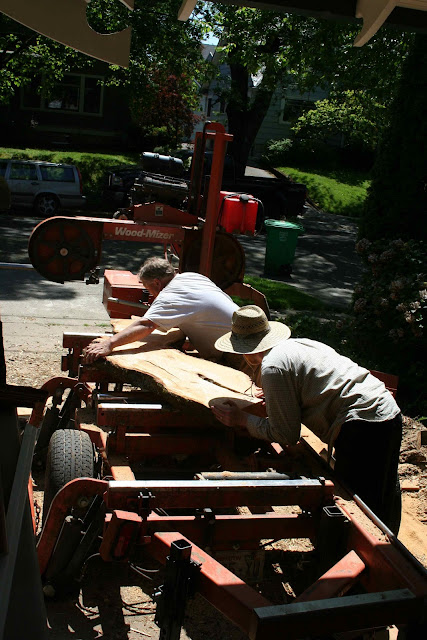 And now we have a huge pile of cherry lumber. After it dries for about 6 months, we'll have to figure out what to do with it all. We seem to be drowning in wood . . . though there are worse problems. 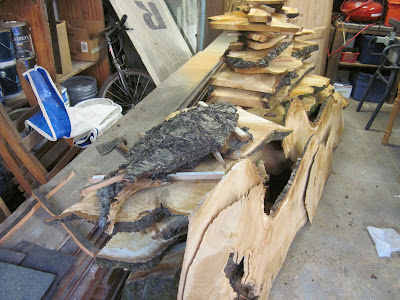 In case others in Portland need this kind of tree service, he charges $60 an hour.

Jeff and I volunteered to work at the Multnomah County Master Gardeners' Incredible Edibles Sale last Saturday, so we naturally came home with a whole bunch of plants.

Jeff has been working hard since Saturday to get the plants in the ground. So far, most of the plants have gone into the garden in the front yard. 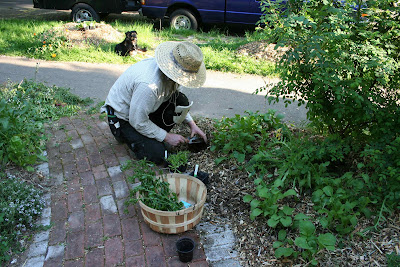 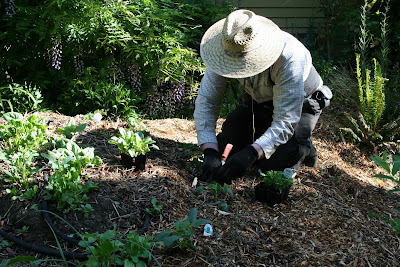 The temperature has been in the mid to high 80's the past several days, so this was actually not a fun project. But Jeff is a good sport and got the plants in the ground before they died in their tiny pots. 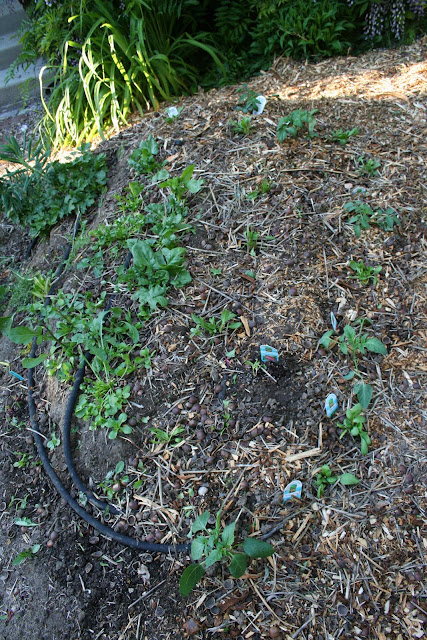 The planted mound in the front yard. It doesn't look like much now, but this space actually produced quite a lot of food last year. This year, Jeff remembered to put down a soaker hose before he put the plants in, so that should help with watering. Since the rain garden is out of business during the summer, Jeff also popped in a couple of vege plants into its basin. The squash plant should have plenty of space to spread out.

Today was the big day. Two trees came down and our huge walnut tree was trimmed back. 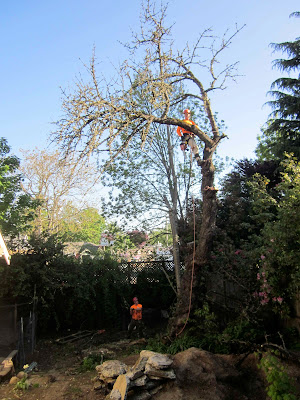 Shasta had her last opportunity to jump into the majestic old cherry tree. She and the squirrels are really going to miss it. I'm sad it had to come down, but it was just too dead to leave it in place. Those huge, dead branches would have eventually come down and it's better to pick the time and place. 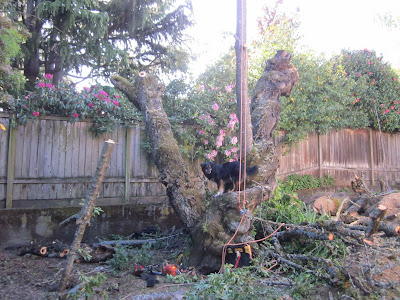 In the end, the huge old cherry tree was reduced to a large stack of wood and pile of mulch. 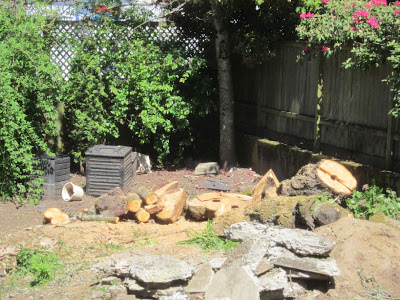 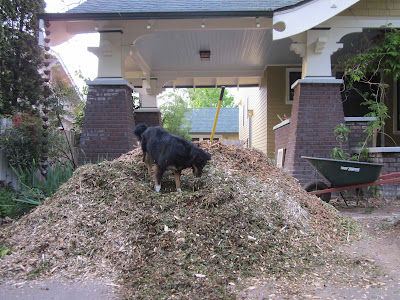 The birch tree in the side yard also came down. It was trapped between the fence and wall and we were concerned it would come down on the houses in a wind storm. Well, really the neighbors were worried it would come down on their house and we obliged them by removing it. They're splitting the expense with us. I forgot to take a picture of it when it still had the branches. It was a pretty tree. 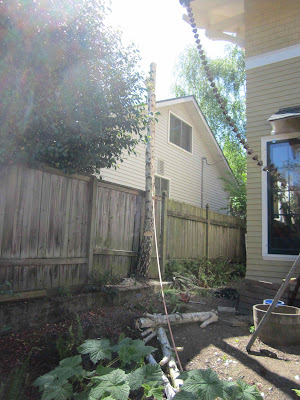 Another stack of wood. So sad. 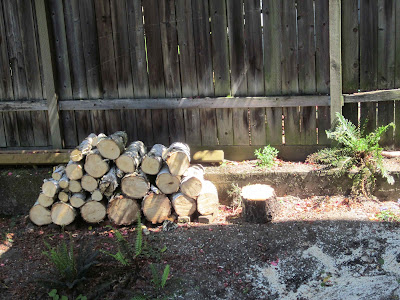 We're having the cherry tree stump ground out on Friday. We'll try and get the backyard finished enough that we can plant a new tree in its place this fall.

On the bright side (pun intended), it really opened up the backyard and there is sun back there now. We might actually be able to grow some vegetables back there this summer.