Our basement is a pigsty and has been getting steadily worse for a couple of years. We have too much stuff down there. We've been meaning to clean it up, but it never makes it on the task list. The desire to get ready for seismic bracing finally inspired a bit of effort this past week.

The before pictures are really bad and the after pictures aren't much better. We're still sifting and trying to get rid of stuff. We gave away the huge oak entertainment center. It looked nice, but it really wasn't working with the doors. We couldn't close them because then the remote controls wouldn't work—Why do they design entertainment centers like that?—so the cabinet was filthy inside.

Since it was so difficult to clean, we decided to try something more open. We swapped out the cabinet with a sofa table we've had for like 20 years. We're hoping this will be much easier to clean.

We also had to shift all the bookcases to interior walls from the outer walls so we can open the walls up and install the bracing.
The futon is too large for the basement, so I'm keeping an eye out on craigslist for a Murphy bed we can replace it with. And I need to figure out how to get rid of more stuff. Ugh. Sifting is such an unfun job.

We also went and bought the wood for the garden shed/coop and it was delivered last night. 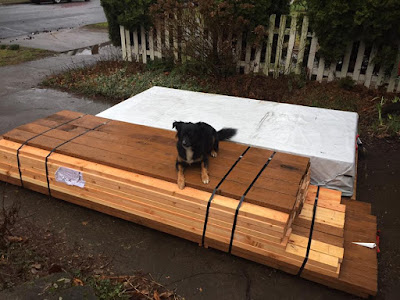 We're hoping for several days this month with decent enough weather to make good progress on this project. I still need to track down green roofing to match the house. 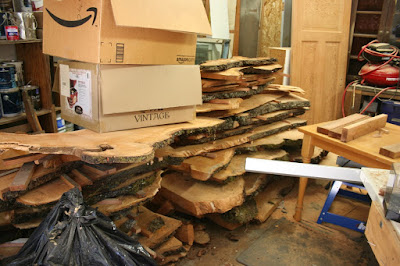 It's been 3.5 years and we haven't done anything with this huge pile of cherry wood. We need to dig some space out of the garage so we've decided to sell this wood. Do any of our followers have any clue what kind of price we should ask on craigslist?

We have finally almost unburied ourselves of the huge pile of tile we bought in 2015. We used the subway tile in the bathroom and after months of listings, we've managed to sell most of the colored trim tiles. Whatever is left at this point will probably get donated to The Rebuilding Center or I'll put a free ad on craigslist.

We have too much stuff. We have so much stuff to get rid of. I pretty much have ads on craigslist all the time. We definitely have to participate in the Laurelhurst garage sale this year. (Yes, we could donate a lot of stuff, but it turns out when you have almost no income a tax write-off is worthless.)