After the Wholesale Nursery debacle, I had pretty much sworn off of buying plants from online nurseries. But this year, when I wanted very specific plants for my particular color scheme, I began thinking it would probably be okay to order from nurseries in Oregon because at least the plants wouldn't have to travel as far.

While I was poking around doing searches for the heuchera in the specific colors I wanted, I found all of them on clearance for $5.99 and $2.99 at the Santa Rosa Gardens website. Then I found some columbines in good colors for $2.99; those would be perfect for the backyard rain garden. And the more I looked, the more I found that I had to have. Honestly, I got a little shopping cart happy when I was perusing their clearance plants. Even though I was reluctant to order from them, I had a moment of weakness and clicked the order button.

At the time, I thought they were located in California, which seemed not so much further than Oregon. At least it's on the west coast. But I learned after I placed the order that they're actually in Florida! Oops.

Anyway, my order arrived today, just three days after I placed it. This time, my result was MUCH different. 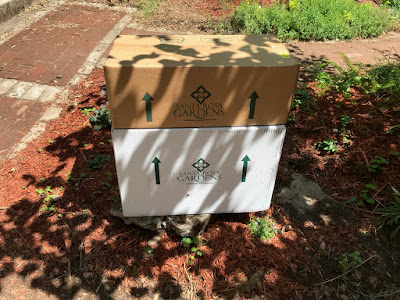 When you pick the pots up you can feel a little of the dirt has been knocked out of the pot. If you support the netting, you can shake most of the loose dirt back into the pot.
They recommend you cut off the netting from the bottom and pull it off from the top so you don't bust stems/branches.

The columbines were looking a little parched, and there were a few broken stems here and there, but they're looking pretty good—and alive—which is a nice change. 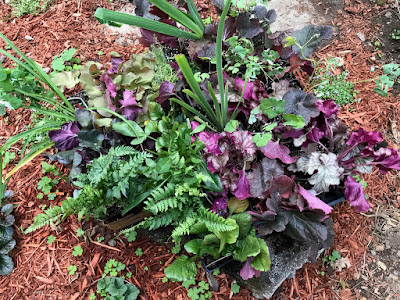 Some of these plants were ordered for the backyard Hidden Garden, which isn't ready yet. So, those will get repotted into gallon pots and we'll keep them on the back patio until we're ready to plant them in a month or two.

Update: They just sent me a 50% off coupon for the holiday if anyone is interested. The discount is off the clearance prices. 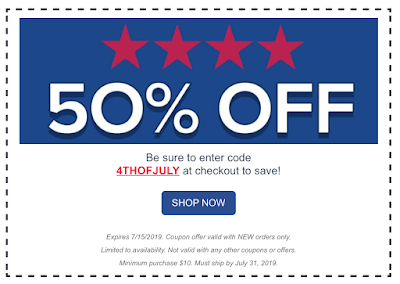 Posted by Sharon Kwilter at 5:57 PM No comments:

Now that Jeff and I have been spending so much time in the yard, I'm starting to reconsider some of my earlier plant choices. I think I'm ready for some more flowers. :)

We planted two small thimbleberry plants in the backyard rain garden and it obviously loved that spot because it has been a chore to control it in the backyard.
Before Jeff realized he could literally chop it to the ground and it would come back, this is what the thimbleberry looked like. It felt like an impenetrable wall splitting our backyard. 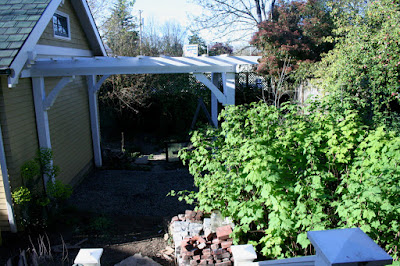 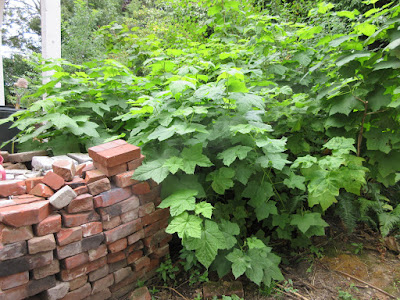 After a severe pruning, it got better by Aug 2016. Also, in summer 2016, a friend of ours brought over two large garbage bags of ferns and quite a few of them ended up in this large rain garden.
Here is where the rain garden is at this summer. 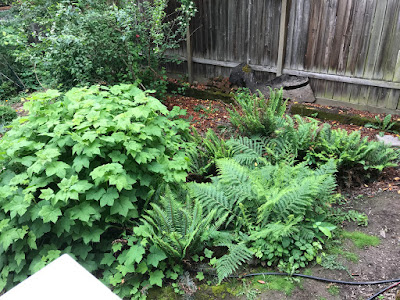 I think I'm ready to remove the thimbleberry. It's a fine plant if you have a huge yard, but we don't. This plant is occupying one of the few sunny spots in our backyard and I would prefer to plant some flowers there. I think we'll also dig and relocate some of the ferns. I predict quite a few will be moving down to our soon-to-be installed Hidden Garden.

Aaron and Jeff finished double digging the second side of the parking strip. The planting isn't complete as we still need to buy ferns and maybe a columbine, but we found more of the Forever Purple Heuchera. The next time we feel like driving out to Echo Valley Natives, we'll pick up the rest of the plants.
We can't do nearly as much planting on this side of the parking strip because there are two utility access covers taking up quite a lot of space on the side and back.

The garden is looking quite nice now. It's time to start harvesting lettuce for salads. 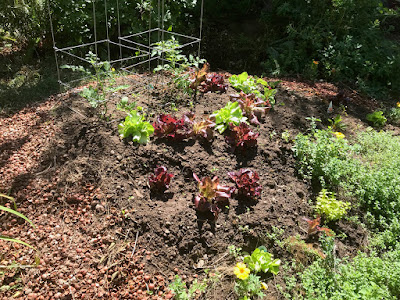 And the Oceanspray is in flower. I think we put this native shrub in when we installed the rain gardens in 2012. 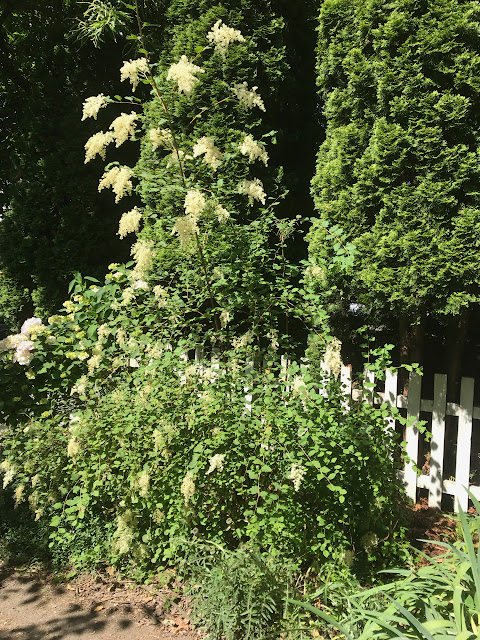 Now we REALLY need to turn our attention to cleaning house. Sharon's father is coming for a visit in two weeks! Our house still hasn't recovered from our aborted attempt to move.
Posted by Sharon Kwilter at 1:17 PM 2 comments:

We actually did this last week, but I'm just getting around to showing the photos. The wisteria had quite overgrown the porch entry. We really should have cut it back over the winter, but it wasn't high enough on our priority list. This wisteria has been pretty indestructible, so it will surely recover. 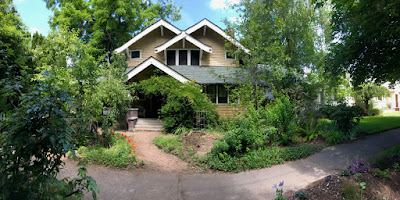 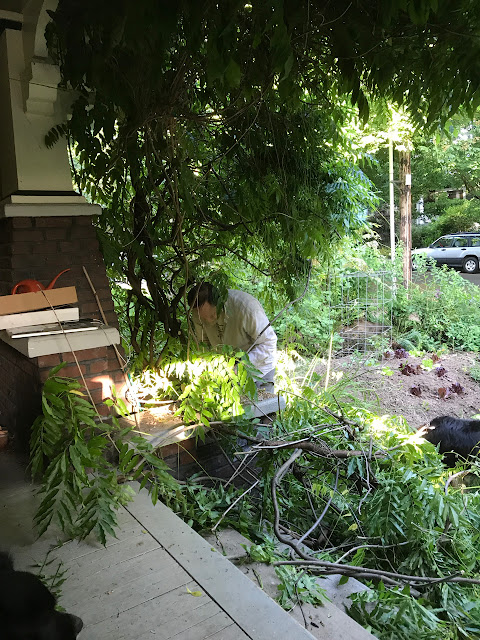 Posted by Sharon Kwilter at 10:55 AM No comments:

Email ThisBlogThis!Share to TwitterShare to FacebookShare to Pinterest
Labels: Landscape

We had a bunch of brush piles sitting around in the yard. I suggested we take it all into a place that accepts yard waste, but Jeff wanted the wood chips for the yard. Today we rented a chipper to get rid of all of them. I may have been silly and rented a 6-inch chipper; I had forgotten how big a 6-inch chipper is. LOL 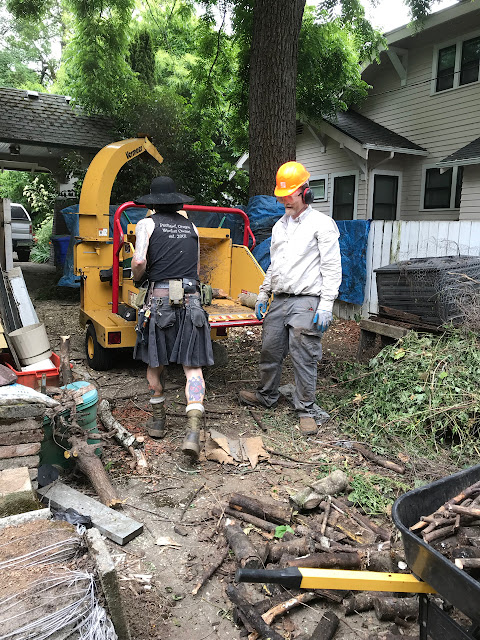 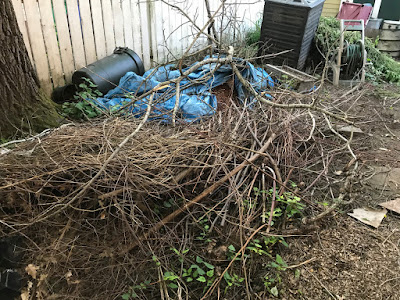 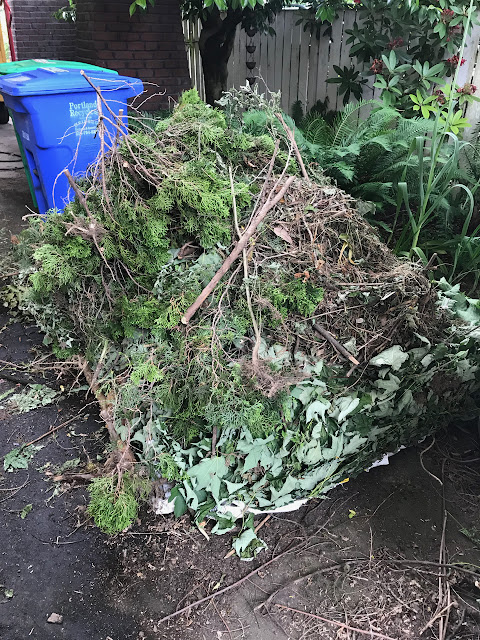 Now all we need to do is get rid of the old lumber and we'll be ready to fix up this part of the yard in fall. 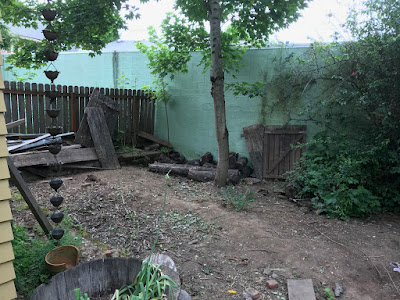 I was digging through old photos trying to find some pictures of the plants in our rain gardens and I was struck by the transformation in the yard. I have to admit, I didn't entirely remember what it looked like when we bought this house. It was a pretty standard suburban yard: lawn with somewhat neglected flower beds. 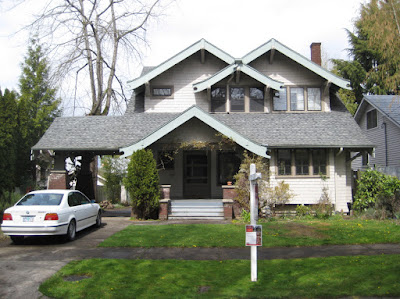 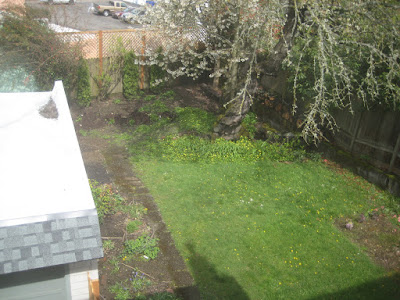 I'm pretty sure quite a few of you think the before photos are better, but we don't like to mow grass. Frankly, we've always considered lawns to be a waste. They suck up resources and give you nothing back unless you have little kids who play on them. We do not. 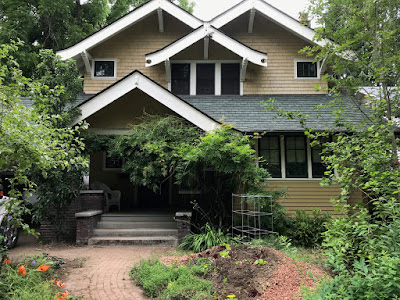 The reason we originally put in the rain gardens is because we decided to disconnect from the storm sewer system. When we moved here, Portland offered a gutter disconnect program that offered a good discount if residents could manage their stormwater runoff on their own properties. The rain gardens have worked great. (That program ended in 2011, but I think residents can still save 35% off their sewer bill to disconnect by applying at the Clean River Rewards site.) I believe the discount is about $25 off each bill. Over the last nine years, the savings have really added up.

If I had to do it over, I might select more groundcovers and fewer shrubs for the front yard, but we chose plants that were supposed to be good for the native wildlife. And honestly, it is nice to listen to all the birds when we sit on the porch.