So, it turns out right angle rulers are not marked with inches; at least, not the number of inches that represents the length of the line on the ruler. That would have been a nice thing to know last week. That line labeled 6 is actually seven inches, so the finished size of my blocks are considerably larger than I wanted. LOL

I almost decided to cut down all my triangles to get them to the right size, but I just don't have the right rulers to do that accurately and can't find one either despite a pretty thorough search.

(It took me a while to figure out what that number actually represents. Apparently, that number represents the size of the square if you sew four of these triangles together.)

So I went back to Electric Quilt and played with the design to make the quilt smaller; I don't want to make another bedspread. I made a few alternate designs and this is the one Jeff liked best. 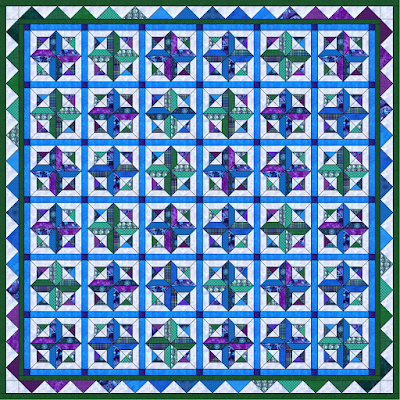 Until I can think of a better name, I'm still calling it Queen's Jewel even though it's not the exact same pattern anymore. It is still made from pretty jewel tones.
I've finished twelve of the blocks so far and I've gotten it down to about half an hour each to construct them so I have about 12 hours of work left building the blocks, perhaps less as I am getting into a bit of a rhythm of ironing, pinning and sewing and I've gotten faster than when I started. 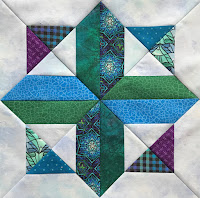 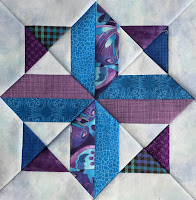 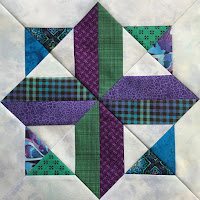 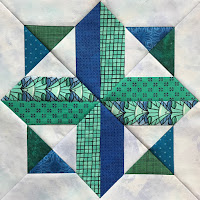 Now I just need to figure out how to calculate the size of the border triangles.
Posted by Sharon Kwilter at 8:00 AM