Since we are refinishing our basement, I had expected Jeff would want to replace his home theater gear. It's getting pretty old—most of it was bought before we moved into this house—but he decided he was still happy enough with it. We don't really watch much TV anymore. But since we'll be doing all this work in the basement, we are going to actually install the TV and speaker system so there aren't ugly wires hanging everywhere.

We plan to hang the TV up on the wall with an adjustable wall mount.

Also, I decided to make some little shelves for the speakers so we could place them around the room correctly. I saw a cute photo the other day of small shelves made with pipe fittings and decided to make some of my own. I used galvanized pipes because I like the finish better. 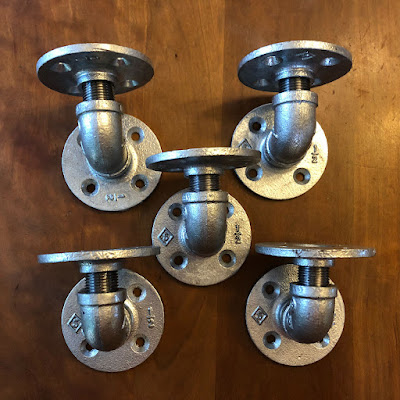 I'll go dig through our douglas fir scraps soon and cut some small shelves so I can stain them with the rest of the wood.
Finally, we'll be taking the time to install cord raceways/concealers, but we haven't chosen one yet. It's tempting to order them now during the holiday sales, but I think it would be better to wait until we're ready to install them so we'll know better what size we need.
Posted by Sharon Kwilter at 5:31 PM