The last few days I've poked around a bit and I figured out the builder on our house: Spencer McCain. I actually always had it, but didn't realize it. I had this original plumbing permit from 1912. It shows the owner as Spencer McCain. 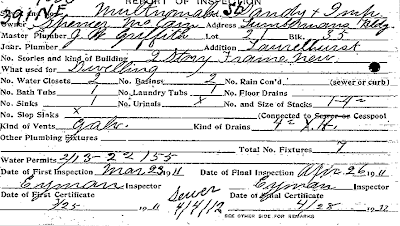 This morning, I typed the name into Google and a few links showed up in architectural publications. Then I tried the Oregonian archives and I found a few ads, shown below. (It would help if they didn't change the format every time they put it in the paper; over the three years it shows up as Spencer & McCain, Spencer McCain Co., Spencer-McCain Co., and Spencer, McCain Co.) 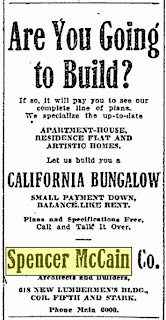 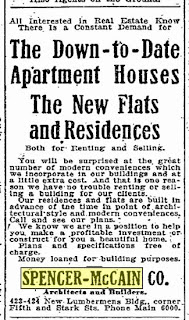 I also found a number of classified ads for lots and building plans by this builder, but not ours, alas. Maybe they just had too many projects in the works to consider this one important enough to advertise. All of these ads were published between 1909 and 1912, and then the name disappears. I wonder what happened . . .

Anyway, this afternoon I wrote the Architectural Heritage Center to schedule an appointment to do some research on our house. Hopefully I'll be able to find more information about our house specifically.

Update the next day:

Some more digging and I found it (the description of our house's construction):
The article reads:

The Spencer-McCain Company has prepared the plans and commenced the erection of a two-story, seven-room, modern frame residence in Laurelhurst. The design is carried on the broad lines with low sweeping roof and broad eaves. To one side and under the main roof is carried a porte-cochere supported by heavy brick columns. The exterior of the house is shingled with brick trimmings.

The interior is finished with hardwood floors, beamed ceilings, and panel wainscot in the main living rooms. There is very broad, artistic mirrored buffet in the dining-room and built-in bookcases in the den. The mantel in the living-room is rock-faced brick. On the second floor are three chambers and bath, which are finished in white enamel; also a large sleeping porch and airing balcony. The Dutch kitchen and lavatory room are also finished in white enamel. There is full cement basement with furnace and fruit room. Completed this residence will cost about $4500.

For more detailed entry of this builder, visit my Spencer McCain Page, where I've set out the information I've found so far on the houses he built.