The Oregonian, 14 Jun 1913
The C.K. Henry Residence to be Sold at Auction TODAY
Saturday, June 14th, at 2:30 PM
Northeast Corner of East Glisan Street and Laddington Court
Sale Will be Held on the Premises 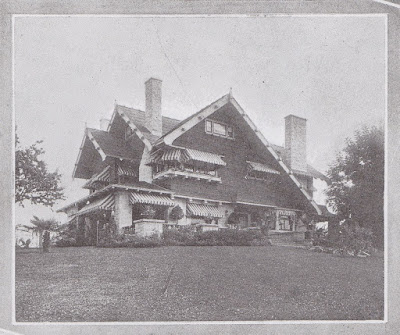 This beautiful residence occupies an elevation of 250 feet above the river, erected on the site of the old Ladd Farm house under Mr. Henry's personal supervision and inspection. He and his family having camped in the old farm house while this residence was being erected, and being intended for the final home, received the utmost care and attention from Mr. Henry as to every particle of material and labor put into the dwelling.
The site is one of the most healthful and attractive locations in the City of Portland, and receives more hours of sunlight than any other elevated spot in Portland, commanding a view of mountains and all directions of the compass.
The stone work in the residence is of the finest. Every window, from basement to attic, and every glass door, is fitted with best selected plate glass; basement is fully finished in Keene's English cement, with iron columns instead of wood posts. The first floor is finished throughout in solid mahogany as fine as shown in any Steinway Piano, being the best specimen of work ever done by the Parelius Manufacturing Company. The hot water heating plant and plumbing was supplied and put in by Jacobsen-DeTemple Company in their best manner. One the second floor every door, including closet doors, are Pitcher Perfection Sliding Doors, requiring double partitions. Hardwood floors throughout, not the ordinary three or 5/8th, but 7/8ths of an inch thick; best piece of hardwood flooring laid down in the city. Porches and terraces are all laid with Welch Quarry Tile, done by the Oregon Art Tile Company, and is one of the finest pieces of work done on the Coast. There are five open fireplace in the house, four of Rookwood Pottery Tile and one of glass Faience in the living room.
Mr. Henry erected and caused to be erected a number of large buildings in the city, and it seemed as it material man, as well as mechanic, took the utmost care to supply the best of goods and give the best of workmanship in this beautiful dwelling. Every door and window is supplied with rustless metal weather stripping and screens. In every detail the house has been fully considered, and inspection will prove it first class in every particular.
The grounds, comprising nearly ten lots, are beautifully landscaped, and contain some of the finest shrubs, flowers and trees to be had. The pool and pergola and tea house on the grounds are artistic and finely built. The location of the property is fine. 26 miles of paved streets surround it, and a direct paved street into the city, as well as car service passes in front of the property.
Furniture, furnishing and Oriental rugs, if wanted, can be had at private purchase after the sale.
Mr. Henry, having sold the Henry Building and other properties here, and moving to Southern California, is his sole reason for selling this property.
This property will be sold to the highest bidder. There is no mortgage upon it, and Mr. Henry is ready to give liberal terms on same. Intending purchasers can see plans and arrange for inspection of the property by applying to Mr. Henry, at his office, 83 Fourth Street, Henry Building.

The Oregonian, 15 Jun 1913
Leslie Scott Gets Home
With only two bids...the handsome home of C.K. Henry, in Laurelhurst, was sold at auction yesterday afternoon to Leslie M. Scott, for $41,000...
The residence is considered one of the finest in the Northwest. It occupies sightly ground at the northeast corner of Laddington Court and East Glisan Street. The interior is of elaborate finish, being in solid mahogany, and the floors of quarter-sawed oak. The site comprises and nine and one-half lots, the larger portion of which has been given rare landscape treatment.
Mr. Henry, with his family, will leave in a few days for Pasadena, Cal., where he recently purchased a beautiful home. He expects to remain permanently in California.
Leslie Scott said last night that his mother, Mrs. H.W. Scott, would occupy the residence purchased from Mr. Henry. The Scott residence at the northwest corner of 12th and Morrison streets will be removed and the quarter-block will be improved soon with a business structure. 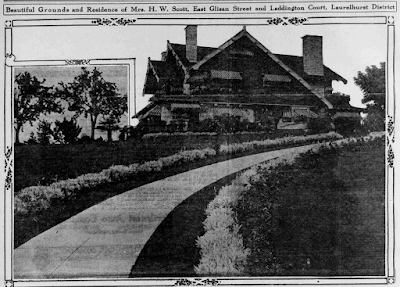 I also found this fantastic drawing from 1916. I've cropped it way down to mostly just include the Henry and Keeney houses and the grounds and shared garage.

Posted by Sharon Kwilter at 9:30 AM