Portlanders have learned in the most recent years how the new high-speed freeways can shorten the driving time between their homes in outlying or suburban areas and the places where they work or shop. They like the freeways. The traffic stream moving down the magnificent Banfield freeway into the heart of the city at a legal speed of 55 miles an hour is proof of the popularity of the freeway.

And they are impatient for the completion of more of them, such as Portland-Salem Baldock freeway.

Freeways serve two purposes for big city dwellers. They provide faster and safer routes into and out of the city for the people who can conveniently use them. Those who cannot use the freeway to shorten travel time between home and work, or shopping, also are benefited.

Pressure Relieved
The freeway takes the pressure off congested routes, as the Banfield has relieved Sandy boulevard, and as the completed Baldock will relieve some of the bumper-to-bumper parade on Barbur boulevard.

The freeways serving the cities were long overdue. Over the past 30 years the average speed on rural highways were improved.

Over the same 30-year period there has been a gradual reduction of speed in the urban areas because of increasing traffic congestion. Only those cities which have put considerable mileages of freeways into operation have noticeably shortened travel times.

Data collected in the recent years by traffic engineers show that generally freeways are nearly twice as safe as city streets in terms of fatal accidents, and five times as safe in terms of total accidents.

It is said that generally cities with the greatest mileage of freeways driving have the best safety records. Drivers who are more familiar with freeway travel are less likely to become involved in accidents.

Planned Ahead
The federal government’s interstate system freeways are being designed for traffic volumes expected in the year 1975. By that time the freeway system in Portland is expected to handle 300,000 vehicles per day entering or leaving the urban area, according to the Oregon State Highway Department. This figure is over and above the internally generated “short trip” traffic.

Construction of new freeways attracts manufacturing and industrial plants, truck terminals and distribution warehouses; and residential subdivisions and multiple dwelling units. Big shopping centers spring up in areas where freeways may bring customers quickly and easily from distant points and where ample parking space is planned in advance.

Portland is one of the many American cities where newcomers, and also local residents, gravitate toward suburban homesites. Freeways enable these people to drive many miles to and from their work.

First of the Portland freeway system to be completed was the Banfield freeway. When the East Bank freeway, which will carry the Pacific highway through east Portland along the bank of the Willamette River, is completed probably in 1963. Banfield's usefulness will be greatly increased.

Interconnections between the Banfield and the East Bank will bring Banfield traffic to the city center more rapidly than now is possible, and distribute it more efficiently north and south to other points.

Two Links due
In the near future two important freeway links are scheduled for completion. The Baldock freeway will be completed to a connection with SW Harbor drive at about this same time next year. Still later, the Marquam bridge will be built to carry through traffic on Baldock over the Willamette and along the East Bank freeway.

Next project will be construction of the Interstate freeway along N. Minnesota avenue to extend the Baldock-East Bank system to the Columbia River crossing to Vancouver. Nearer completion is the Sylvan interchange on Sunset highway, scheduled for October of this year, and the widening of Sunset to six lanes at this point. Within the next three or four years Sunset will be six-lanes to the Multnomah-Washington County line. Still later Sunset will be widened to six lanes through its twisting lower section known as Canyon road.

Where Canyon road enters downtown Portland it will be connected with a new Stadium Freeway System, which will connect with Baldock and with the East Bank-Minnesota avenue system via the Marquam bridge at the south and the Fremont bridge at the north. These projects are on the order of some seven years away.

The East Bank and the Stadium Freeway System thus will become the “inner belt” of the freeway system in Portland, connected on the south of the Baldock, on the north by the Interstate freeway along Minnesota, on the northeast by the Banfield, and on the west by the Sunset.

Both suggestions are aimed at increasing public use of mass transit and relieving traffic congestion caused by private vehicles. 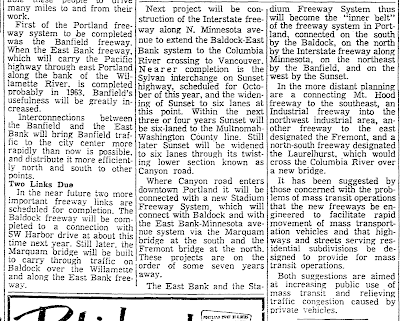