In the Laurelhurst district, some 250 persons agreed to petition the City Council and other public bodies not to locate the proposed Central East Side Freeway through their district. They also formed a Laurelhurst Community Council.

At Shattuck School on the city’s near southwest side, Asst. School Supt. Amo DeBernardis said the school faced no immediate threat of closure despite dwindling enrollments. More than 100 persons also heard from other officials about urban renewal, freeway construction, Portland State College expansion and population shifts in the school’s attendance area.

The Laurelhurst group, meeting in the auditorium of Laurelhurst school, adopted a motion opposing a freeway within the district bound by 32nd and 33rd Avenues on the west, SE Stark Street on the south, 47th Avenue on the east and NE Halsey Street on the north.

Complaints Listed
They said such a freeway would (1) disrupt the district’s character and aesthetic values, (2) disrupt church and school boundaries, (3) remove valuable property from the tax rolls, (4) cause the development of low-rent and multiple-family dwelling developments and (5) restrict use of Laurelhurst Park.

Robert Frisch, chairman of the Freeway Fact-Finding Committee, reported the city planning staff favored a route bypassing the district on the east. This route would run between 50th and 52nd Avenues as far north as Halsey Street and then swing over to just east of 47th avenue.

A route running between 39th and 41st Avenues through the Laurelhurst district has been under discussion but according to Frisch no route has been selected yet even tentatively. City Hall will have the final word.

The proposed freeway, referred to on some past occasions as the Laurelhurst Freeway, would be part of the Federal interstate highway system. It would run north through Portland’s central east side from a Freeway link crossing the Willamette River between Lake Oswego and Milwaukie, and could cross the Columbia River near Portland International Airport.


Route Choice Looms
Frisch reported plans called for starting construction in 1968 and completing it in 1972, which would mean selecting a route well before 1968.

Some persons at the meeting thought the route should be east of 82nd Avenue so the free would not bisect Portland’s east side at all.

The group voted to organize formally as a community council. It agreed to meet again in mid-February and elected Frank Landsburg, acting chairman.

In the Shattuck area, the Foothills Freeway route has already been selected and residents at the meeting seemed interested in what would happen rather than in what they could do about it. The school’s Parent-Teach Association sponsored the session.

The school houses kindergarten through 8th grade and has a capacity of 726. But enrollment this year has dropped to about 350, continuing a recent trend that school officials attribute to the South Auditorium Urban Renewal Project.

Construction of the freeway bisecting the district in the next few years is expected to bring further enrollment losses. The school district’s research office has tentatively predicted an enrollment of 259 four years hence.

Population Shifts
City Planning Director Lloyd Keefe pointed out that while there had been a substantial population loss during the past decade in the lower, flat part of the Shattuck area the population had grown in the hills of the upper area to the southwest.

He predicted further commercial development in the section bounded by SW 4th Avenue and SW Broadway and said there would be few residents in the lower area. Furthermore, he added, these residents would have few children of elementary school age.

On the other hand, said Keefe, investors have their eyes upon 100 to 150 acres of steep hillside to the southwest. Developments there would probably include multiple family dwellings, which Keefe said would mean a number of children and hence the need for maintaining a school.

Dr. DeBernardis said the school district staff has talked about acquiring a new school site up in the hills near the University of Oregon Medical School for several years but there has been no action yet. 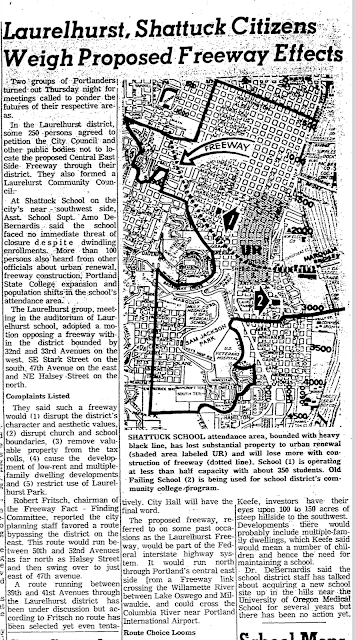