I have been randomly jumping around from project to project the last couple of weeks, in an attempt to get some overdue projects done before we shut down all the house projects to focus exclusively on writing in November.

We did get back to the brackets in the bathroom, but it was delayed because I decided I wanted to paint them a different color. I had painted them the fake-chrome I used in the basement, but it looked really stupid next to the real chrome. So, I went and bought heritage white spray paint that was a close match to the tile and recoated them.

They went up pretty well, though there are a couple of scratches I need to touch up before I declare it done. 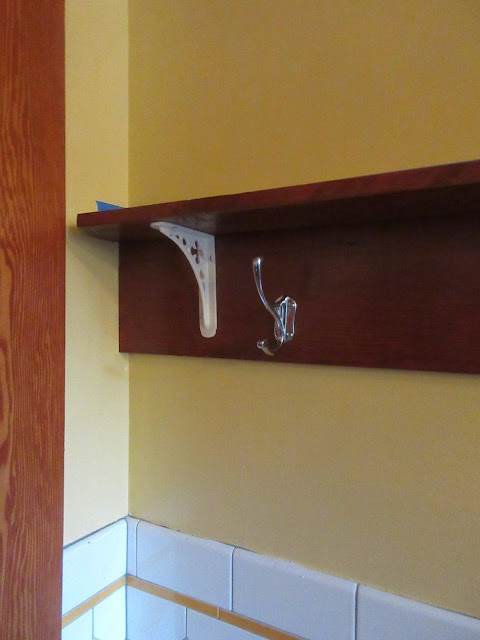 Jeff is struggling to get the chrome hooks hung because the screws they came with suck. They keep stripping, no matter what prep he does. Yes, we can replace them, but there is at least one stuck in the wood that we haven't been able to remove. Jeff's talking about grinding it down with a dremel tool.

Since he gets way too much anxiety from these kinds of frustrating projects, I'm considering finding a handyman who can spend a few hours installing hardware throughout the two bathrooms we never entirely finished.

I have spent a couple of days sorting and pricing books. I am attempting to empty most of our bookcases. It's a difficult project because I love books. I always have. But I finally accepted the fact that I'd just rather read stuff on a computer screen and these books are taking up so much space. So far, I've been donating all the books that are worth less than $3 each and I'll probably briefly try to sell the ones worth $3 (it's a whole bookshelf). If I can get someone to come and buy some, great. If not, I'll just box them up and donate them too. I have another shelf of $5 books and I'm hoping some of those will go because there are a lot of SCA books. We shall see. The most valuable books, I've listed on Amazon and eBay. 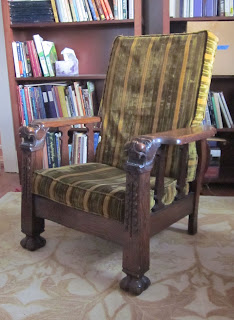 I've even found myself expanding the room prep to include recovering that Morris chair we bought way too many years ago (omg, five years ago). We've never been able to use it because the foam was hard and the board attaching the springs in the seat was compromised. So, this week, I finally decided to try and finish this project.

So far, we managed to remove the springs. I believe we're going to put in a solid wood base based on a recommendation from JC over at My 1923 Foursquare. Simply, it's the easiest solution for us to do this ourselves.

I emptied out the solid foam from the cushions so I could use them as a pattern. I started out by trying to cut it with a serrated knife, but that soon went awry; suffice to say, I'm glad the knife was not sharp. Then I realized I could just grab off chunks with my hand. Yuck, that was a huge mess. It took more than two kitchen garbage bags to hold it all. 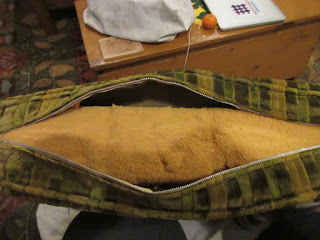 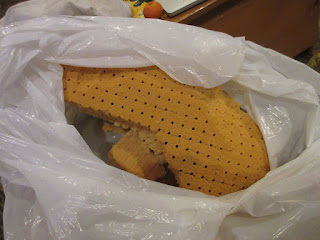 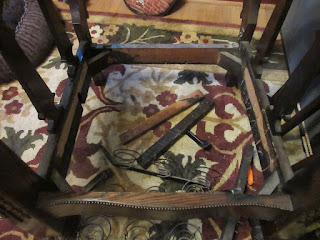 I've already got the fabric for this chair. I just need to convince myself that I'm brave enough to cut it.

Posted by Sharon Kwilter at 8:54 AM