It took about 4 hours to have the home inspection done today. In addition to the many problems we already knew about, the inspection also found a number of problems we weren't aware of. 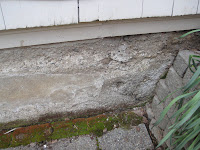 The 96-year-old foundation on the house has issues. The inspector showed us an exposed section on the back of the house where he could basically shove his pocket knife into the cement. While there aren't many visible cracks, the concrete is very soft. So, now we're trying to figure out what this means for the future. How soon does this foundation have to be replaced? 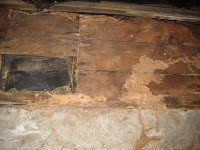 The inspector also found some pretty extensive termite and beetle damage. In fact, there is a large beam under the front of the house that is practically hollow. He was almost able to insert his finger into the soft wood. We were also unaware of this damage before this morning. 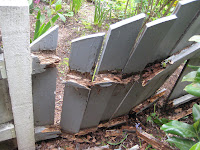 While we were walking along the side of the house looking at a sagging roof, I tripped over something sticking out of the ground and I fell backwards into the neighbor's fence. It was so rotten that the fence just came down. Unfortunately, I managed to fall on a nail which punctured my hand. Ouch.

On Monday we have two more appointments. It's possible we'll have enough information by then to make an informed decision.
Posted by Sharon Kwilter at 9:16 PM