Sharon tried to reinstall our front door hardware. Though her father and three brothers have all worked as locksmiths at one time or another in their lives—there clearly is no lock gene which she shares with the rest of her family. After about 30 minutes of fiddling with it she finally gave up. Jeff had better luck, or umm...skill!! It's just a little change—but it's so nice to be able to go back and forth through the front door again. 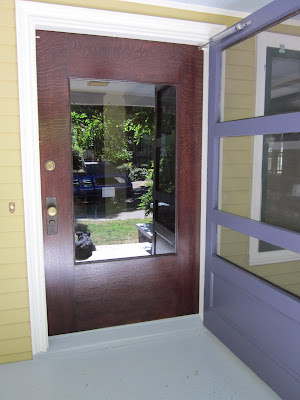 We are hoping at some point to refinish that lock plate or find a suitable replacement that will dress up the front door. But we've spent too much this year; it will wait.

The mason we hired last summer to repoint the brickwork finally came out and finished the job! Apparently they had never gotten around to sealing the brick and installing the damper and once the brick was wrapped for the remodel they couldn't get to it earlier this year. So now they are finally done. At the time we were happy with their work, but were very disappointed when we learned they had not finished the job last summer. Though, at least they were honest enough to tell us they had to come back and finish.

Sharon has continued to spend large amounts of time doing embroidery. She either sped up or spent a bit more time yesterday because she managed to "get ahead" of the initial pace. 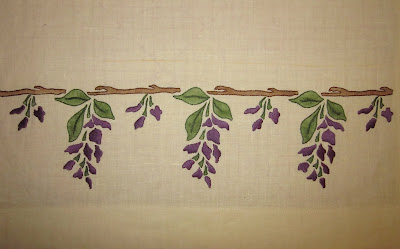 Though we really should be working on finishing the paint stripping in the master bedroom, we don't like working in the heat. Admittedly the upstairs is cooler than last year, but we don't like working when it's over 80°F up there. So the project is simply going to wait until the weather cools down a bit. We could, of course, turn up the cooling, but we really need to work with the windows open and we don't want to pay for all the cold air departing through the windows. Now that we have the main floor back, sleeping in the basement isn't a big deal.

This afternoon we're meeting with Craftsman Design & Renovation to try and close out the job. We have been working on a "punch list" which lists all the problems/unfinished items. So we'll probably have a couple more days of workers while they work through that list and then we'll be done! (With this job anyway.)