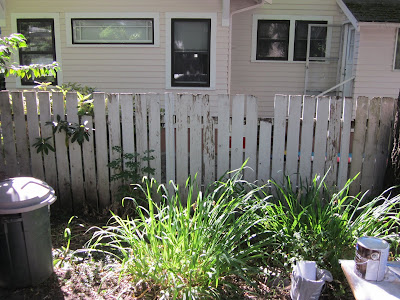 Our side fence is in pretty bad shape. When we first moved in, our neighbor, Jim, talked to us about the fence. He was happy to buy the wood and assemble the new pieces, but he didn't like painting fences, so we agreed to do it. So, this morning we spent about 3 hours painting fence boards, until it just got too hot. The paint was drying much too fast in the heat.

Over the weekend, Jim started assembling sections and we started with painting those, but then we realized how much more work it was to paint assembled sections so we abandoned that effort in favor of painting the fence boards for him to use when assembling the next sections. I think it will save us a lot of time if we can paint the wood before he assembles the pieces. 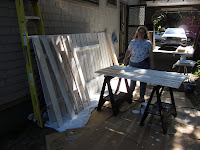 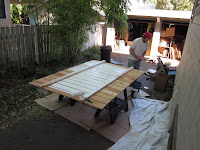 Despite thinking we had decided which remodeler to go with, I found some pretty crummy reviews on Angie's List for the company we were so enthusiastic about on Thursday. And then we met with Green Hammer again on Sunday to look over one of their completed jobs and it raised their performance in my estimation, so we're back to not knowing which to choose.

So, in an attempt to gather more information, yesterday evening I spent a couple of hours calling references for each of the contractors. Unfortunately, it hasn't really helped; all of the folks I called gave very glowing reviews and barely managed to come up with any problems with their jobs.

Tonight we are going to meet a lady who switched to Green Hammer from Craftsman Design and Renovation after the initial design phase of her job. We're going to go and talk with her about her reasons for switching, and we're going to see the work that Green Hammer did for her. I'd really like it if we could decide this week which company to hire! I'm eager to have this decision settled so we can move on to the next task on our list!
Posted by Sharon Kwilter at 3:49 PM