Jeff and Shasta started dog agility training a couple weeks ago. This is something Jeff has wanted to do for a while, but we just found a good training program in Wilsonville, offered through the Columbia Agility Team.

Based on Shasta's early enthusiasm for the equipment, we believe she'll be quite good at it. Since she is still pretty spastic even at 3½ years old, it's probably just as well we didn't jump right into agility training a couple years ago after the obedience training. 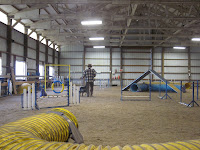 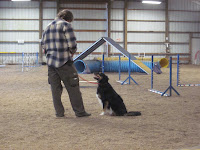 This is the wobble board that helps the dogs become accustomed to unsteady footing.
This is the teeter totter. Apparently the training is started with the board all the way down, and then it is gradually raised. This get the dogs used to staying on the board while it is rocking and then gradually the height.
Shasta was a natural at the dog walk ramp. She was practically running by the third time across.
Shasta enjoys the tunnel. Sharon tried repeatedly to get a picture of her going through, but Shasta was just too fast for her camera.

At the end of a run, the dog has to get onto a table and hold for 5 seconds. This was another easy one for Shasta.
It should be no sweat for her to pass this class!

For fun, This Old House has an article on how to build three different pieces of agility equipment. We'll have to do this soon.

Posted by Sharon Kwilter at 3:58 PM