How We Strip Paint

First, we tried the silent paint remover, but we didn't have the hands-free stand and found it to be bulky and awkward to work with. It was too large and heavy to hold while you were scraping paint, but it was too hot to set down on most surfaces. So using the SPR ended up being a two person job; one to hold the stripper, one to scrape paint. We also were more apt to burn the wood because we couldn't see the wood while we were holding the stripper over it. I've seen many websites rave about this tool, so perhaps if we had bought the hands-free stand, we would have liked it better.

The professionals we hired to strip paint in our downstairs used inexpensive heat guns. We bought a $60 Ryobi variable temp gun from Home Depot. Once we bought the smaller hand-held heat gun, things really improved on the paint stripping front. And we've since found a heat gun to be the best tool at removing the bulk of the paint.

We also have a variety of scrapers designed for many different contours. (I don't actually recall where we bought them as it was quite a while back. Sorry.) My favorite is a teardrop shape as it does an excellent job at scraping down through the paint to the wood. While it cleans a smaller amount of wood with each stroke and takes many more strokes to clean an area, it does such a good job of cutting through the paint to the wood, I think it's worth the trade-off for energy expended. 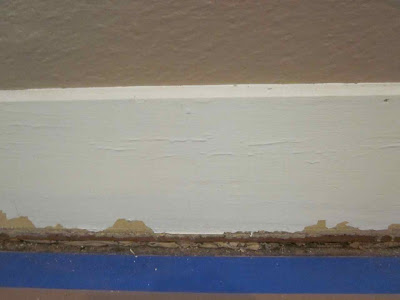 To prep this baseboard, we removed the shoe moulding. We're planning to refinish the floors, so we'll be replacing that piece. We also masked down paper on the floor, even though we're refinishing it. It's a messy business and it's easier to clean up with the paper in place.

One note about the photos. I took these by myself, so I had to put down one of my tools in order to take the photos. When I strip paint with the heat gun, I have the scraper in one hand and heat gun in the other. I'm usually moving the heat gun over the surface, softening the paint, and then using the scraper in the other hand at the same time. These photos only show one of the tools working at a time because I had to set one of them down to pick up a camera. 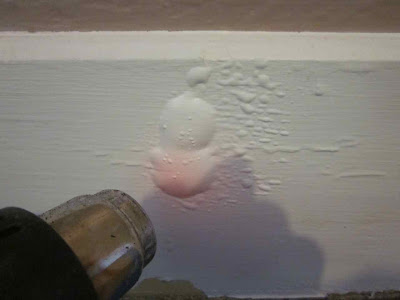 I start by softening the paint over an area. I try to keep the gun moving around, as I don't want to burn the wood and end up with a black spot. 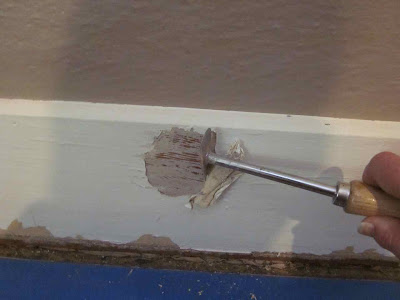 Once you've softened the paint a bit, use the scraper to take off as much of it as you can. 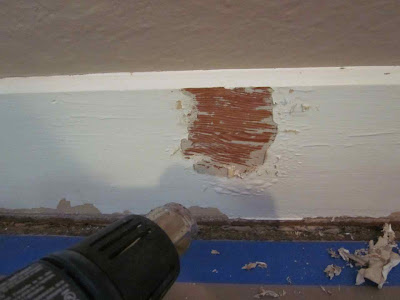 I like to keep going over the area and get off as much of the paint/primer as I can because the heat gun is far less expensive than the chemicals. 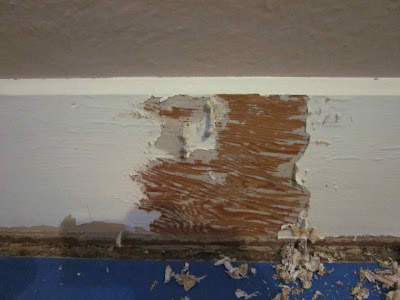 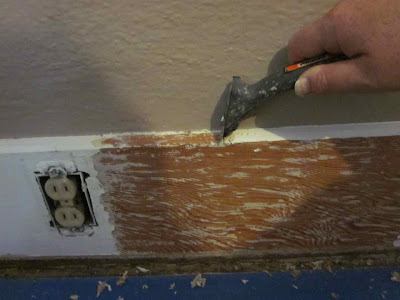 I have a different scraper I like to use for the top of the baseboard which is a better width to do the job in one stroke. 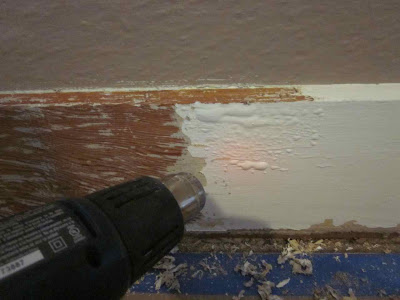 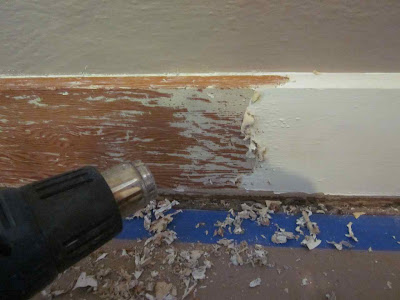 Jeff filmed a short video of me stripping paint and I've included it below. 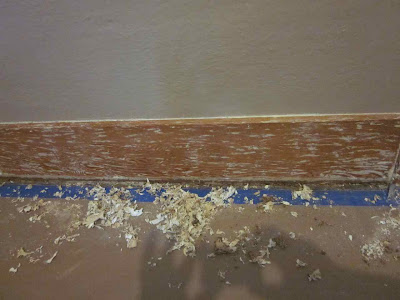 I can usually get the bulk of the paint removed with the heat gun and scrapers. At this point, I sweep up and put the lead paint debris in a separate garbage can where it will be properly disposed of. 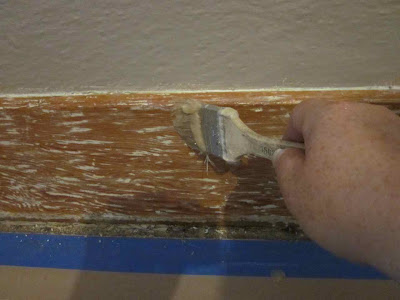 Once I've removed much of the paint with the heat gun, I apply a coat of one of those awful toxic paint strippers. I like KleanStrip from Home Depot, but I've also tried Jasco; they both work but I've found Jasco to be more "runny" and more expensive. (One of the blogs I follow did a stripping comparison between KleanStrip and Jasco and found the Jasco to be more effective. I'll add a link to that post as soon as I remember which blog it is.) So, my current plan is to use KleanStrip for woodwork above my head, like door jambs and picture moulding, and use Jasco for low woodwork, like baseboards.

BTW, we've tried the eco-friendly strippers. They didn't work for us, at least not very well. We've used SoyGel, Peel-Away, and some others I don't even remember what they are called. They take forever (24 hours or more between coats!) and often don't do a good job. Who wants to spend years stripping paint? Not me. So we switched to the toxic stuff because it works--and fast.

Anyway, you let the stripper work for about 15 minutes. I often have a hard time waiting that long so I try and apply the chemical and then go work in another area while I wait.

I've tried a number of tools to get the stripper off. After trying many things, I've found the most effective "tool" is a steel kitchen scrubby. We bought a bunch from a restaurant supply, but we also bought some from Dollar Store. We usually have several of them in use at once. While you're using them, they do "fill up" with the gunk, but once it dries, it falls right out of the scrubby and you can sweep the stuff up for proper disposal and continue to use the scrubby. 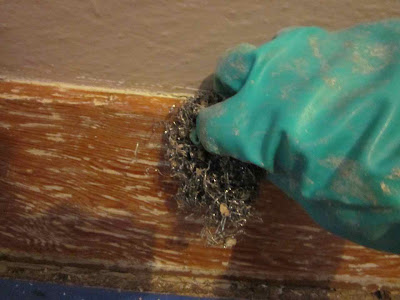 Quick tip: Don't scrub paint stripper with the scrubby above your head if you can avoid it. If you do, you may find little bits of paint stripper raining down on your face and they burn! I try and use a ladder tall enough that I'm at least level with the woodwork I'm working on. 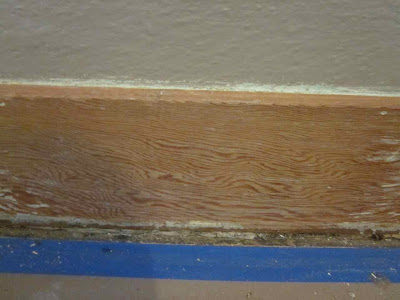 As you can see, the chemical in conjunction with the scrubby takes off most of the remaining paint. 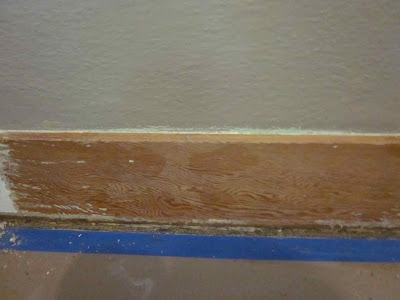 I usually reapply small amounts of the chemical stripper in the spots that didn't strip and come back for a second pass.

And here we go. This small section is just about ready for sanding. I usually don't sand the wood on the same day as I apply the stripper because I like to give it time to dry out. 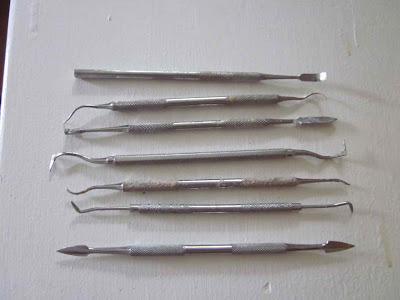 Of course, these wide flat areas are a breeze compared to crown mouldings and picture rails. Those are torture to strip. I suggest investing in a lot of dental tools. We were lucky that our local army surplus store stocked dental tools so we went and loaded up. My favorite one is the square curved one on top, but they all have their uses.

To strip these difficult areas, we find we often cannot get much if any paint off with the heat gun because we don't want to risk burning the wood. So, in these areas we just start with the chemical stripper. We apply a generous amount of stripper and let it set for 15 minutes. You have to work at the different profiles with different tools. It usually takes quite a few passes with the chemical stripper and dental tools. With patience and determination, you can get there.

Posted by Sharon Kwilter at 2:43 PM