Jeff and I are obviously taking a bit of a vacation from working on the house. That wasn't my plan; I actually had a few projects I wanted to finish by the middle of January, but it's clear from our total lack of progress they won't happen. We did work pretty hard this last year, so I feel entitled to take a month or two off from house projects.


This week I started a new sewing project: I'm making medieval-style costumes for a big SCA event coming up in Portland, called 12th Night. Jeff and I played with SCA for many years, but we've been mostly inactive since 2008. However, since this event is so close to our home, and we have many friends who still play, we decided we'd better go. 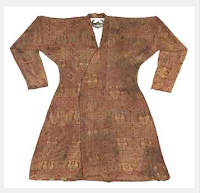 I'm making a style of costume I've never made before—something along the lines of the silk lampas robe from the 12th century (shown on the right)—mostly because it's comparatively fast to sew and comfortable to wear. (No corsets required!)

I'm using fabrics I've already got stashed in my sewing room. My costume is going to be very raspberry color, which probably isn't a period dye. But, I'm making these clothes for fun, and I'm not planning to enter them into any contests. So, I'm okay with using up old fabrics and going to play.

I'll try and take some photos to share once I have more layers of the outfits finished.