Yesterday afternoon I went into my sewing room planning to spend 40 minutes tidying so I could check off my daily tidying task in Habitica. I had a new pile of clear file tubs to replace the opaque boxes and I figured I may as well get started. That 40 minutes turned into about six hours yesterday and then another couple today.

Regrettably, I don't have any before photos. It was an embarrassing mess. Every horizontal surface was covered with fabrics and other misc. projects. There was a mound of fabrics and boxes under the table that poured out the sides making it hard to walk around the table. 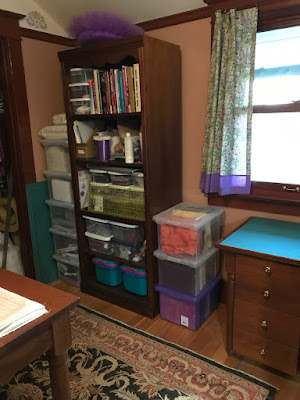 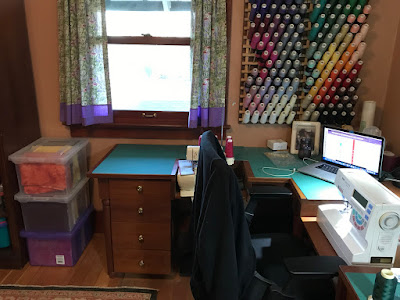 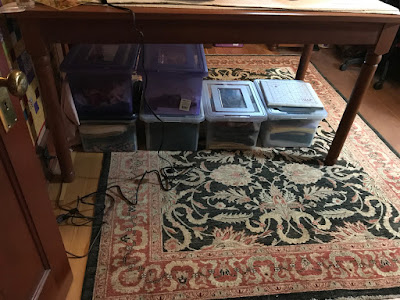 I opened every box and took everything out and made a list of all my projects in progress. The list is staggering. I'm not going to list them all, but I was amused by more than a few of them. I had a square dance skirt that only needed elastic. I also had at least three square dance skirt projects that I had started but not finished. They were diverted into the scrap cotton bin. I'm not even dancing right now and I've heard most people don't wear cute skirts and petticoats anymore. (This makes me sad.)

I still have not finished those two lumbar pillows I made in 2012. There's a potholder that needs the bias tape edge. I never finished the lampas robe from 2013 plus a bunch of medieval clothing projects that pre-dated the blog. (Yes, before 2008.)

I also opened up my sewing table drawers and sifted them. I couldn't believe some of the stuff I had squirreled away. I had the hardware to make at least thirty (probably more) Roman shades. Yes, I liked making them and I might make more, but holy cow, I do not need 40 shade pulleys. My first instinct was to get rid of all of it, but then my family hoarding gene clicked in and I decided to pull out just enough to make Roman shades for our bedrooms. At least now it only takes up one shoebox-sized tub. I also decided I could get rid of the hardware I bought to make triple pleat drapes for Redwood City. Yes, Redwood City. We moved from there in 2010.

So now that I have this absolutely humungous list of already started projects, I've decided to do something drastic and stage my own intervention. One of the blogs I follow, Threadhead, mentioned she joined a 2020 WOOFA Challenge and I think I will too. I'm getting a late start and I'm prone to get distracted during the summer when it gets so hot, but even if I don't manage to make it through the whole year, getting several of these projects finished will be a huge win. 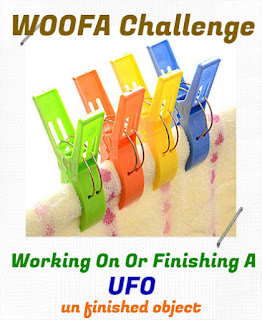 I haven't made my list for the challenge yet but I will soon. Right now, the hardest part is prioritizing them. I may just start with the projects that will take less than an hour to finish and get them out of there.

Posted by Sharon Kwilter at 7:04 PM