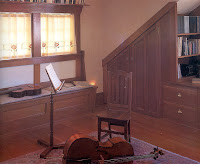 I've been poking around my bungalow books to figure out what kind of window coverings people commonly used on craftsman homes in period (1910-20ish). In general, they seem to be pretty plain, simple casing curtains that hang inside of the window frame. I have found a few period pictures of print fabric, but they're not usually opened up so you can see the fabric.

I think I'm going to compromise by using print fabrics upstairs in the bedrooms and bathroom, and use plain stenciled or period-appropriate prints (like William Morris) downstairs. On modern bungalows, those published in the bungalow style books, you also see quite a few Roman shades. That makes me feel better about my choices for the upstairs windows.

I'm trying to take careful measurements for my sewing projects next week as this is my last day up here in Oregon until our next visit. I've got a fairly long list of sewing projects I'd like to accomplish next week in California: 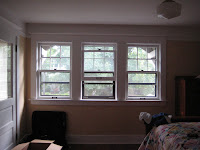 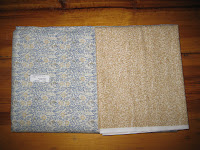 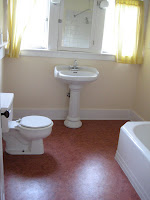 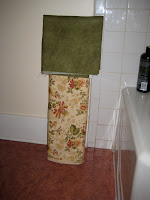 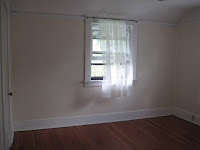 Posted by Sharon Kwilter at 9:14 AM