While bedroom furniture shopping up in Portland we stopped in at a furniture store called Classic Home & Antique. We were hoping to score some good deals, but they ended up being one of those expensive, upper-end furniture stores. We walked around their store, appreciating their stock, but walked out empty-handed, though more informed about some more furniture brands for more educated shopping in the used market.

One of the brands we found was Bentwood Furniture manufactured in Grants Pass, Oregon. I liked their furniture, but their prices for solid oak furniture were stratospheric and not something we were going to spend in our current about-to-be-unemployed situation.

However, on Tuesday, while I was waiting around the house (and should have been cleaning) I was cruising Craigslist furniture listings in both Portland and the SF Bay Area, I had the most incredible luck. I found someone in San Francisco who was selling several pieces of Bentwood Furniture for maybe a third of the original price! (I was so excited!) Apparently he's been trying to sell this furniture for a while now, and was getting ready to just donate it. 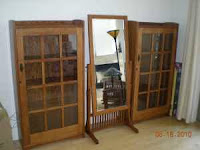 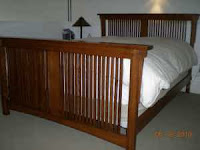 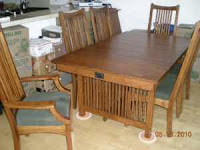 Well, despite having a long drive back to California yesterday (right around 12 hours), we got in the car again last night and drove up to this guy's apartment in San Francisco and took a look and, ultimately, bought it all! He had a dining room table with two table leaves and six chairs, a queen size bed, two book cases and a mirror. (He also has a dresser that I'm hoping he'll sell me, but he's "thinking about it" first.)

So, one of my challenges this week will be figuring out how to get the furniture from his loft in San Francisco and up to Portland. We may end up having the furniture wrapped up and moved here to Redwood City and we'll put it in the next POD. We just need to try and rearrange the garage to make room! And, yes, even with the additional moving expense, I think it will turn out to be a good deal. Especially considering, after weeks of shopping on the Portland craigslist, I just haven't found a good deal on a good quality set. I've found good quality sets for far more than we just paid and lots of beat up cheap sets. This is by far the best deal I've found after shopping for weeks!

Posted by Sharon Kwilter at 8:09 AM