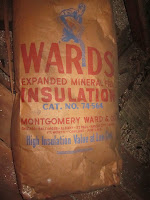 Spring is quickly approaching and I guess it's time to start thinking about having the vermiculite/asbestos removed from our attic. I called three different asbestos abatement firms from the DEQ list and lined up quotes during the coming week. It sounds like it's going to be roughly $5,000 to have the asbestos removed from approx. 1000 sq. ft. of attic space. 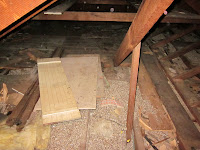 I hope this will mostly take care of the problem and we won't have to deal with more later. But we really won't know until we open up some of these walls and floors for the remodel.

Tomorrow we have an appt with Craftsman Design & Renovation for our final quote. I'm trying to prepare myself for the presumably massive number they're going to give us. Then we're going to have to figure out what parts of the job to cut out, which is going to be difficult.

Update on Monday morning:
Woo hoo! I'm pretty excited to get a quote from a firm in Tualatin, Asbestos Control Group, that will remove the vermiculite for $1,700! Yeah—we'll have an extra $3,300 for pretty hardware on the main floor.