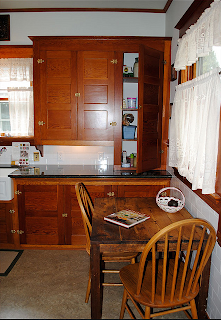 Sharon found a picture recently of the approximate color scheme of our new kitchen. She grabbed the photo from this set of Flickr pictures, which claims to be a circa 1915 kitchen. The colors are real similar, but we'll have a non-shiny countertop because we'll be using soapstone. And we're also getting a matching soapstone sink made.
Sharon's given up on having stone tiles installed on the backsplash; it's just too modern. Our current plan is to use reproduction subway tile on the backsplash and also in the adjoining half-bath. It will look more period, which is a feature.
Finally, our floors are going to be oak, to match the rest of the main floor.
The floor plan and earlier elevations were posted here back in December and there haven't been many changes, but a few minor ones. Sharon's meeting with our kitchen designer on Friday to finalize the cabinetry selections. She believes Craftsman Design is having a local custom cabinetry maker make them out of FSC-certified douglas fir for us.
Sharon really thought it would be cool to salvage the wood from the existing kitchen to go into building the new cabinets, but it actually doubled the price! Since the price of this kitchen is already astonishing, we had to pass. Instead, we'll hold onto the cabinetry doors and hopefully be able to build in some nice DIY cabinets in the basement at a later time. We also may be able to use some of the wood to repair the broken drawer fronts in the dining room.

Posted by Sharon Kwilter at 5:26 PM