Sharon would like to make all of the ornaments for the tree for our Winter Solstice/25th Anniversary celebration later this year. She has compiled quite a few neat ornament ideas and is planning to try many of them over the next several months. She will try and share her successes and failures here for others who might want to try making their own ornaments. 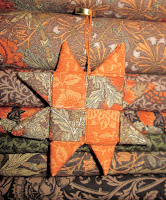 Our first try was weaving stars from fabric scraps. They turned out well and were fun to make. Even Jeff spent a couple hours making them and enjoyed the project. We made like twenty of them over two evenings in front of the TV. Finally, we just had to stop, or the whole tree would end up covered in them! There is a tutorial here for how to make them. 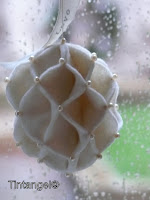 Our next attempt was rather less successful. We tried to make this round ornament out of felted wool fabric scraps. Jeff carefully cut out a bunch of circles and we assembled them and sewed a bunch of the intersections, but it became clear pretty quickly it wasn't working very well. We had used two different colors of wool which also were different thicknesses and it looked sort of floppy. (Unfortunately, Sharon didn't take a picture of the failed attempt before she took it apart.) It wasn't terrible, but I didn't look pretty. We plan to try this one again with better materials. 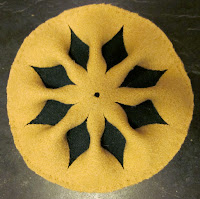 Then Sharon decided to try and find a use to salvage these circles Jeff had cut out. She found this ornament pattern and gave it a try. The first one turned out the worst, because she had neglected to cut the interior colored circle a bit smaller, so the edges stick out. These later two attempts shown turned out better. 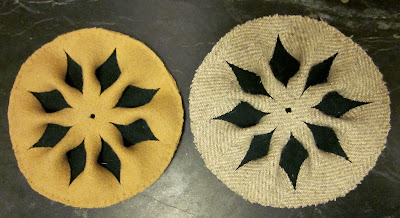 Email ThisBlogThis!Share to TwitterShare to FacebookShare to Pinterest
Labels: Crafts