East Side Is Busy

Building Now Under Way Aggregating $1,000,000.
OUTSIDERS BUY HERE
Transfers Are Many, Building Is Active and Streets Are Being Put in Good Condition--New Homes Going Up.

...The streets through Laurelhurst Addition, comprising the Ladd Farm, have been opened and will be improved. It is predicted that this tract will be disposed of rapidly and will be built over with high-class residences. This will add to the further importance of East Burnside, East Ankeny, East Couch, East Davis and East Everett Streets, all of which are tributary to the Burnside Bridge. An 80-foot street, East Glisan extended, has been provided for in the Laurelhurst Addition, and beyond Laurelhurst Street also will be widened as far as the city limits. Thence it will be extended to Fairview as a county road....

...W.N. Everett is the first to start the erection of a house in Laurelhurst Addition which has been but recently placed on the market. He purchased lot 17, block 13, for $1300 and has started on a 7-room home. J.L. Karnopp, recently from Wisconsin, purchased lot 16, adjoining Mr. Everett's lot, and will also put up a residence. Mr. Karnopp is a builder and contractor. These two residences will cost between $4000 and $5000 each....

Charles K. Henry, president of Laurelhurst Company, will build a residence in the new Laurelhurst Addition, which he will occupy as a home. The site chosen by him is composed of lots 1, 2 and 3, block 1, on the property now occupied by the old farmhouse near the center of the addition. The site is 225 feet above the city and affords a fine view. Mr. Henry has decided to sell his beautiful home in Irvington.

Plans are now underway for the improvement of the addition. The improvements consist of grading, curbing, paving and sidewalking all the streets. Asphalt paving will be used and six-foot cement sidewalks have been ordered for the entire addition. The order for these improvements was passed by the City Council last week. There will be a total of about six miles of streets and 12 miles of sidewalks installed.

The sale of lots in Laurelhurst has been very active since the addition was placed on the market. More than 20 lots were sold last week and the statement is made by the owners of the addition that the majority of the purchasers plan to build homes on the property at once. The first home on the addition is now nearing completion.

Additional plans for the improvement of the addition include the installation of cluster lights along the streets and the erection of an entrance arch at the northwest corner of the plat. 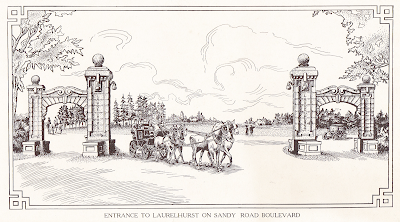