Old People's Home Will Be Luxurious Place
FOUNDER VISITS THE EAST
Mrs. P.J. Mann Studies Other Like Institutions and Will Make Portland's Finest in Country. Cost Is to Be $60,000

Plans are now being prepared by Whitehouse, Lazarus & Fouilhoux, architects, for the Old People's Home to be built on the Ladd tract by Mrs. P.J. Mann in memory of her late husband. For the purpose of studying institutions of like character in the East Mrs. Mann has visited the principal places of this character in an extended trip through the East, and she has taken the best points found in these various institutions and has requested the architects to embody them in the plans for the Portland home.

The Portland institution will be erected on the west end of the Ladd tract, on the site of the old Ladd farm, in what is now Laurelhurst. The site is located on the Rose City carline and was purchased by Mrs. Mann. The buildings to be erected will cost $60,000, in addition to the cost of the site.

The building will be built of brick and will be of Tudor, Gothic and Elizabethan styles of architecture. The structure will be U-shaped and will be 51x132 feet in size, exclusive of wings. It will be of red brick with white trimmings. In the rear of the southern part of the building will be beautiful landscape effects, and special attention will be given to the gardens, which will be made a spot of beauty for the old people who are inmates of the home.

On the second and third floors of the building will be bedrooms. These will be all prettily finished and will a capacity of about 60 inmates. The rooms will be arranged singly and en suite and one each floor there will be a serving-room connected with the basement for the purpose of serving any sick inmates of the home in beds.

In the basement will be all the service quarters, including the kitchen, cold storage room, pantries, heating plant and storage rooms. There will also be a large billiard-room and a smoking-room for the men in the basement. An electric elevator will be installed for passenger service. 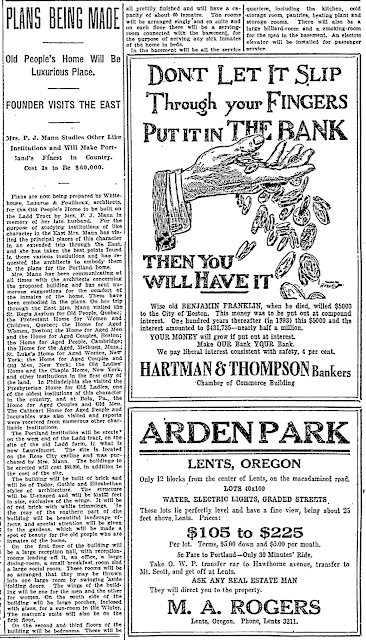 ***** This article is actually peripheral to Laurelhurst. I mention it because C.K. Henry and Homer Keeney seem to be mentioned so much in the early articles.

A pretty wedding celebrated last night was that of Miss Lucinda Patricia Henry and Dr. Homer I. Keeney, which took place at the home of the bride's uncle, Charles K. Henry, in Irvington.

Owing to the recent death of Mr. Henry's son, Charles W. Henry, only relatives and immediate friends were present.

Rev. Mr. Deeney, of San Francisco, performed the ceremony. There were no attendants.

The bride is a daughter of Mr. and Mrs. George Henry.

Dr. Keeney is a graduate of the University of Oregon and Jefferson Medical College of Philadelphia, and a prominent, Portland physician.

Dr. and Mrs. Keeney left last evening for a trip to California. 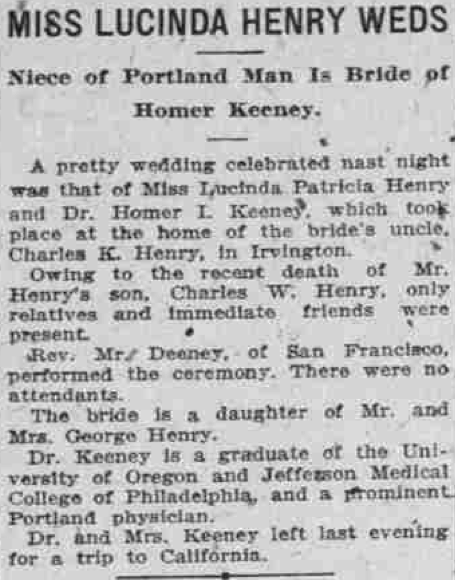 Posted by Sharon Kwilter at 7:00 AM