The main floor plaster repair was all hired out and done by someone who had a clue. But now that we've reached the upstairs, the budget has run dry. Almost everything we want done is going to have to be DIY. 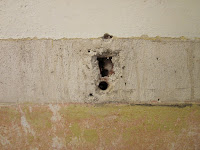 After we stripped off the wallpaper and removed the wood structure in Jeff's closet, we found some unfortunate holes and cracks. Sharon finally summoned enough courage to give plaster patching a try. She had spent way too long researching how to do the process, but finally decided enough was enough—time to do. 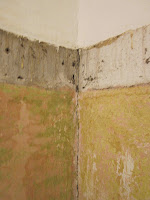 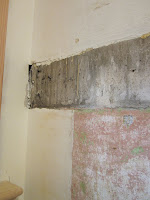 While we would have liked to use a traditional plaster process, Sharon decided to try a beginner-friendly ready-mix joint compound. Since this process is no doubt easy for most folks who visit this blog, we won't waste your time covering the specific techniques Sharon tried to use. We'll just share a few of the more helpful websites we visited in figuring out the process.

Finishing an Inside Corner

Sharon taped over the large hole with mesh tape and she used paper tape for the corners. She put on coat one, not too skillfully, then waited 24 hours!

Then she came back and sanded down the worst of the lumps and ridges and applied another coat of the compound. This is surely where her lack of experience was made clear. The joint compound is not too smooth, though better than what was there. By the second coat, the mesh covering the hole was hidden. 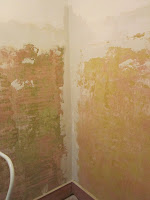 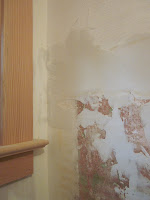 We would have liked to skim coat the entire wall, but it became clear pretty quickly there wasn't enough in the 12 lb. bucket to do more than touch up the problem areas. When you start spreading, that compound goes fast. We barely had enough to finish patching the areas we had to. Next time we'll know to buy 5 gal. buckets or buy the bag and mix up our own.

After waiting another 24 hours, Sharon sanded it down again and applied a third coat. At this point, there really wasn't enough of the joint compound left to do a good job. Sharon could have run off to the store to buy more supplies, but since it was a closet, she decided done was better. 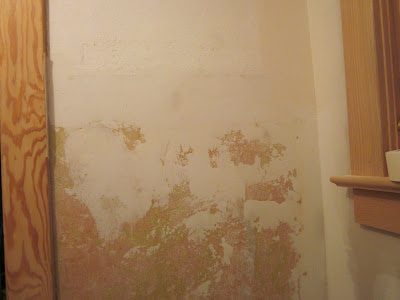 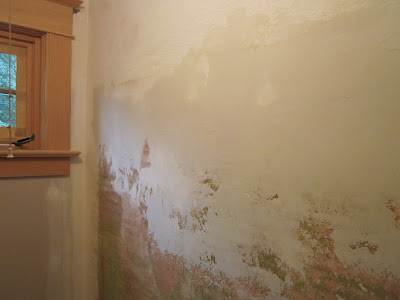