Now that our furniture population has mostly stabilized, Jeff and I have been shifting furniture around to get it fit in better. We had a printer cabinet to put down in the home theater area so we actually had to move over the entertainment center about 6 inches. Boy, was that ever fun! But at least now that we know the arrangement has stabilized, I feel free to "move in." I unpacked a number of boxes yesterday into the drawers of the entertainment cabinet. 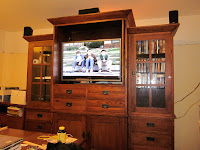 Also, since I cannot bear to get rid of the DVD cases, we put the disks back in them last night. A couple years ago, due to space constraints, we had pulled the disks out of the cases and put them in binders and put the boxes in storage.

Last night we put the disks back in the boxes and alphabetized them and put them in the entertainment cabinet. Unfortunately, the drawers don't fit all the different kind of DVD cases, so we actually have two separate sections! (Bummer!) All the DVD cases that fit in the drawers are alphabetized in the drawers and all the ones that were too tall are in the right upper cabinet. It will have to do for now, until we manage to rip the movies to a disk then they all can get stowed away. 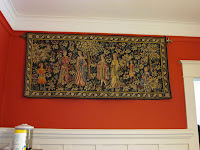 Our tapestries have been rolled in a bundle and kicking around my sewing room since we moved to Redwood City, so today I finally unwrapped the bundle and we decided to at least hang them temporarily on the picture rail. That way they aren't kicking around the rooms and they get to be enjoyed. Ultimately, I don't know if they'll survive the remodel; we may well sell them because they don't necessarily fit the Craftsman look we're going for, but we're enjoying them for now. 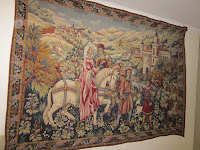 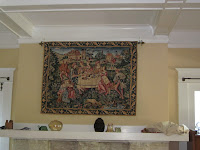 We're off this afternoon to go buy tools for our finishing class. We signed up for the class over a month ago, but they wait until the last business day before the class to tell us what supplies we're expected to bring. Nice! So now we don't have sufficient time to shop around online for good deals. Oh well, another lesson learned.
Posted by Sharon Kwilter at 1:24 PM