I've been obsessing the last week or so about getting our soapstone slab from Sacramento, California to Portland, Oregon. When we remodeled the kitchen in 2012, we bought a "remnant" from Teresina Soapstone that was enough for our proposed bathroom project.. At the time, we planned to get to the project sooner, but we all know how that went..... LOL

Anyway, fast forward two years and Teresina has been bought out by Sierra Soapstone and they don't ship soapstone. They did tell us they have a job next week in Gold Beach, Oregon and offered to bring our soapstone up there. So, now we are trying to work out how to transport it from Gold Beach to Portland.

We are getting quite the education. Apparently you cannot transport soapstone horizontally, but are supposed to transport it on an A-frame or on its edge. I researched the cost to rent a full size pickup and we're going to drive down to Gold Beach. We're hoping to borrow an A-frame from our local fabricator, but we'll build one if we have to. Once that slab is safely tucked in at Portland Marble Works, we'll start demo.

And I guess I better figure out the dumpster soon.

For kicks, Jeff and I have been goofing off with the idea of building a gaming lair in our basement that is inspired by this. It would be a fun way to use a bunch of the salvaged parts we have kicking around in our basement. 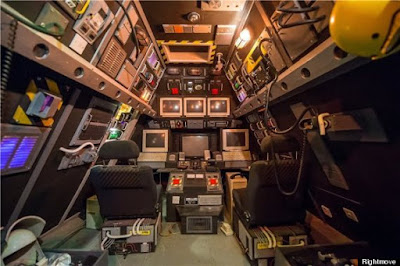 Posted by Sharon Kwilter at 5:29 PM