I have finally mostly escaped the self-destructive habit of playing the ArcheAge game all day and I'm working on my sewing room again. I've packed up all of the hanging and stacked fabrics and most of the stuff in the bookshelf. I didn't really want to declare any progress on the blog again until I had made a lot of progress packing, lest it get derailed like it did last time. :)

I'm hoping to get the room packed up entirely in the next week and get started right away on paint stripping before our weather gets too hot. I'd really like to finish staining the wood and repainting the walls by the end of summer. I'll also plan on having the floors refinished before I move back into the room.

Right now all the packed boxes are being stuffed into the other bedrooms on the second floor, so it's going to be pretty cluttered and unphotogenic for the near future. It's probably going to be pretty crazy when we have to move all the furniture out of the room for the floor refinishing. (I predict the bed in the guest bedroom will get unassembled.)

It was a little painful to start packing up the stacked fabric as I spent so long making those piles just as I liked them. Ultimately, I ended up buying boxes that were just the right size to fit two piles side-by-side without having to reshift the piles. It should be fairly straightforward to put the fabric right back on the shelves mostly the way they were before. 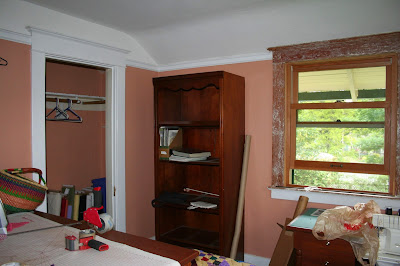 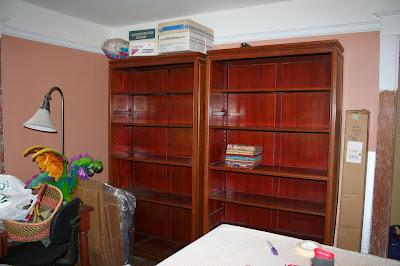 (P.S. about ArcheAge. Don't even think about playing it. The game is being managed extremely poorly by its North American publisher, Trion. I regret some of the money I put into the game, though I must admit I did enjoy it for many months. We hung out with some really nice players and I do not regret the time I spent with them. The game itself is really beautiful, but it unfortunately does not reward hard work, but luck and swiping your credit card. Additionally, many players in the game are really toxic and ridicule players who don't view PvP as their primary desire in the game. Save your time and money. Don't bother.)

Posted by Sharon Kwilter at 8:33 PM