We have been on random the past couple of weeks.

Jeff and I went to Prineville last week and brought home the last of our stuff so that saga is over, for now. Many of the reasons we wanted to move out of Portland are still present, but that decision has been put on the back burner, at least until after the pandemic.

I finished the complicated part of the border on my harvest quilt. 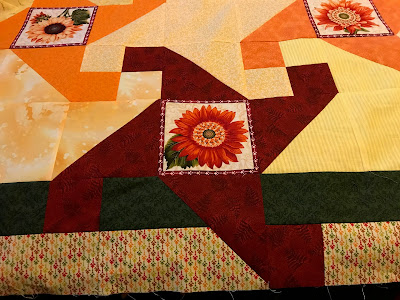 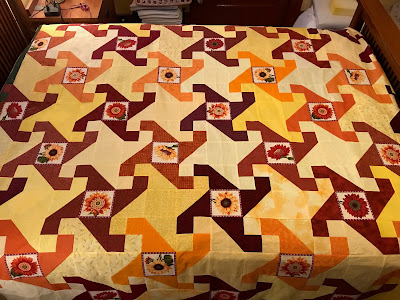 I goofed up when I chose the green for the border and forgot to account for how many total yards I would need, and probably don't have enough for the second border. I may change colors, but I haven't decided yet.
Jeff and I decided to play with learning some French during this new coronavirus lockdown so we've been spending at least an hour a day working on lessons in Duolingo. We don't expect to get fluent in it, but it probably does our old brains some good trying to learn something new.
I've also been working on downsizing again. We sold the couches from Prineville and a lateral file cabinet from the basement. I still have a bed and a futon I'd like to sell, but we need to get them set up and take photos before I can list them on craigslist.
I'm trying to clear furniture out of the basement that we don't plan to keep long-term because I'm hoping we'll work on the basement next year. It would really be nice to replace the ceiling in the family room area because we had to run new pipes and ducting through the sheetrock during our big remodel in 2011/12 and we've never repaired it. I would also like to install some better lighting. Right now it feels too much like a cave.
Posted by Sharon Kwilter at 5:08 PM