We have a start date for our basement project. Tim Austin is currently on a job and believes he'll be ready to start our basement project on Dec 15!! So, I guess it's time to get serious about this! I am not excited about emptying out the basement, but it needs to be done so I scheduled another storage space and we'll start moving stuff over as we pack.

We have a fairly simple "remodel" planned; it's not really going to be more finished than it is now but Tim will be bracing the house to the foundation and then installing a steel framework around the perimeter of the space which should provide further support. This is an example photo he sent me of another job he worked on. 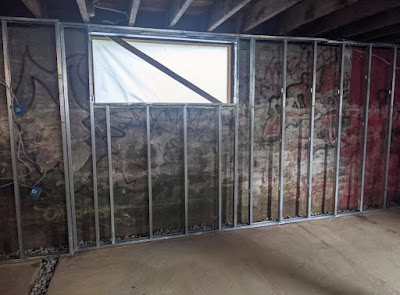 Then Tim is going to level the floor as much as he can within the framed sections. We're not going for full-on level; that's not possible with our horrible floor without more effort than we're willing to pay for. This is another photo he sent as an example. 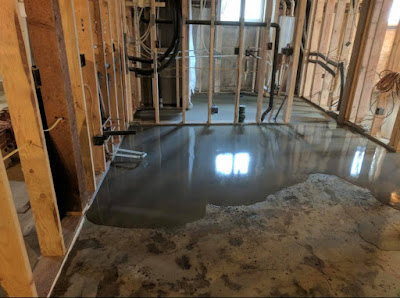 Once leveled, the floor is going to be finished with one of the Lifeproof plastic floors, probably in the Crosbyton Oak color. Tim assures us this flooring is one of the best options for an occasionally damp space. Even though our water infiltration problems went away once Jeff installed the French drain on the side of the house, it surely is better to plan for some future water seepage. 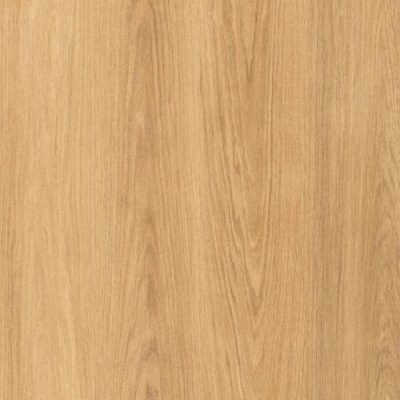 For the ceiling, I had originally wanted to install a dropped ceiling but it is already too low. With a dropped ceiling, we would lose several more inches so Tim persuaded me to replace the current sheetrock with new sheetrock after the wiring is finished. We will take good photos and dimensions to document the space once it is open so hopefully we'll have less destruction when we have future work to do.
This floor plan is roughly what we are hoping for once the space is finished. Really, the only change from the existing space is the addition of two closets and better lighting. We have made some minor changes since I did this SketchUp file, but they're not important enough for me to take the time to update SketchUp.

A couple days ago, I discovered some great wall-mounted arms to install Jeff's computer gear, so we'll be putting those in once the walls are up. Right now the computer gear is in the center of the room clamped to a table and looks so untidy so I'm really looking forward to this change.
We have so much to do in the next couple of weeks. I guess I'd better get started tomorrow!
Posted by Sharon Kwilter at 6:42 PM