Jeff and I are tackling the garage today. We still had piles of miscellaneous stuff from our mad dash to get the stuff out of the rain last year. We had never gotten around to sifting any of it.

I spent a couple hours this morning packing and sifting. We made a dent in emptying some of the cupboards in there. 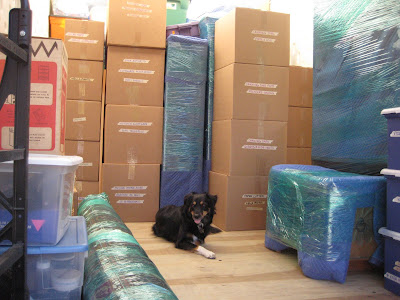 After it got too warm outside, we decided to retreat indoors for some more packing inside.

Jeff is enjoying his first day being officially unemployed by taking a nap this afternoon! I wish I could sleep during the day. I'm goofing off watching a movie while he sleeps. Our internet has been mostly down the last few days, so I'm having to resort to playing DVDs! It's amazing how accustomed to having internet we have grown; it feels medieval to have to stick a DVD in the player.
Posted by Sharon Kwilter at 11:25 AM