We didn't plan it, but today turned into mostly a day of sleeping. I've been so tired this week, that Jeff was sweet enough to get up when the dog woke up, before 8AM, and let me sleep in. I was very surprised when I woke up and saw that it was 10:45! I can't remember the last time I slept in that late. Granted we did get to bed later than midnight due to a late dance last night, but that's late!

Then, once I was up and about, Jeff went back to bed! And he slept three hours! I sewed while he was sleeping and got my skirt nearly assembled. I decided to make piping and put it between the gores. (What a pain dealing with piping in a gathered seam!) I also made some pretty funky ruffles because I was trying to use as much of the fabric as I could! Here's the skirt as it is tonight. I'll finish it tomorrow.

Last night, Jeff and I went to a square dance with a live band. It was awesome! We had such a good time. And I'm doing much better at being able to dance the whole night. I only sat out one square the whole evening and we also managed a few of the round dances. My father and stepmother and aunt were all there plus a couple of friends. It is nice to see family on the floor. 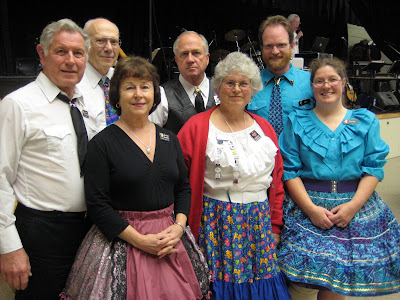 Posted by Sharon Kwilter at 7:27 PM