We took a pause from our master bedroom stripping project to work on another, shorter deadline, project. The parlor has this lovely bookcase built-in with 6 stained shelves. (One of the few things in the house that hadn't been painted on the inside.) About half of the pieces were cupped (bent) and didn't work very well, plus they were stained a very dark brown. 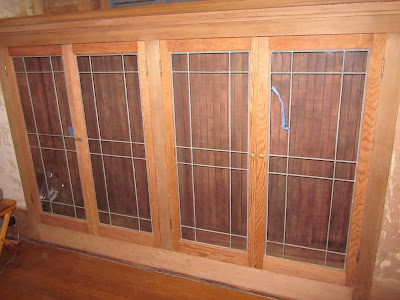 Originally we were planning to just replace all the shelves with new wood. However, after some phone calls to local lumber yards, we learned it would cost more than $200 for the replacement wood. We would need three 8-foot 1x12s. which were something like $75 each. It is past time to clamp down on the spending for this job.

While considering our options, in the garage we saw three large boards removed from the kitchen pantry. They appeared to be large enough, but they were, of course, painted. 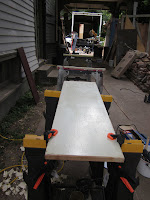 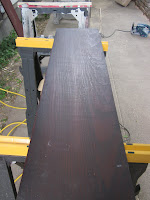 So we decided to go to work cleaning up all the boards we already had. We pulled out the three best (least curled) of the existing stained shelves and went to work sanding those. And we also went to work stripping paint from the salvaged kitchen shelves. Stripping paint was pretty easy, but the wood was still full of primer in the grain. 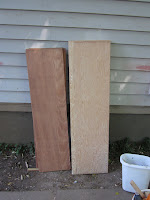 Sharon spent probably 10 hours over the last couple of days sanding. The wood is not pristine, and the previously-stained boards are darker, but the project is nearly done. We just need to cut down the larger boards to the right size.
Posted by Sharon Kwilter at 2:58 PM