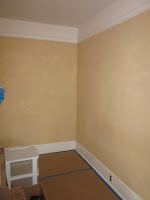 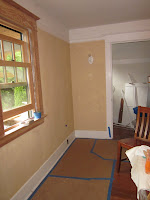 Jeff and Sharon resumed their paint stripping efforts in the master bedroom. Today, we finally cleaned up the room and turned it into a workable "job site." We cleared the walls of stuff and taped down paper all the way around the perimeter. This should make it easier in future to maintain the work area cleaner and we won't have to keep moving piles to work on the different areas. We're thankful for the cool, rainy weather; it definitely makes this task more pleasant than it would be if it were hot! 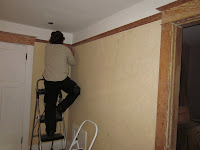 We've come up with a bit of a routine in this project. Jeff does the first pass with the heat gun then Sharon follows behind with the chemical stripper.

Jeff is getting to have quite a talent for removing the paint and has been able to remove the majority of the surface paint on that first pass. Then, the chemicals mostly remove paint from the grain and the persistent bits on the surface. Thanks to the wire brush, the picture rail is actually going a bit faster than we expected. (We were originally thinking about removing the picture rail and replacing it, but now we'll probably just go ahead and strip it in place.)

The closet doorway is nearly done. This paint has been a challenge, so it's taken a bit longer. The paint is persistent on that doorway and resists the chemical stripper; we're having to sand it out of the grain. 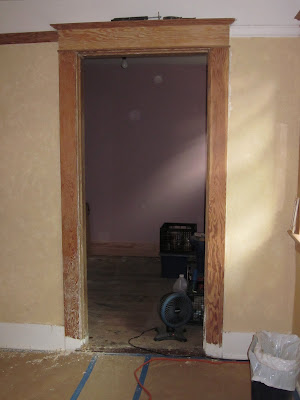 Posted by Sharon Kwilter at 4:47 PM