So, I've been trying to figure out what I can use this Silhouette Cameo for. The box claims it will cut fabric.

I have a bunch of applique projects I'd like to make, so my next test was cutting fabric. The paper manual that comes with the unit does not tell you how to cut fabric, but it does mention being able to cut canvas, so I had to go google searching.

I'd really like to make my projects with linen—as they did in period—so I started with a linen scrap. I will say, for this project, the super aggressive sticky mat was useful, but it still wasn't quite enough to keep the fabric in place.

I tested the linen three times with different settings; it didn't work. This was the most successful test. 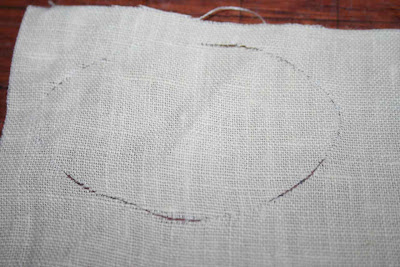 It did score the fabric, so if I was desperate I could finish the cuts with scissors. Admittedly, I didn't really expect the linen to work, so I wasn't surprised when it didn't.

Next I tried cotton fabric, which they do specifically claim the Cameo will cut. That went better, but it still didn't work very well. (And yes, I did use a brand new fabric blade; not one I dulled trying to cut mylar.) 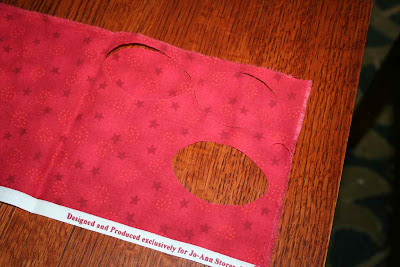 That piece missing originally looked scored like the other two ovals; I took my embroidery scissors and snipped the piece out.

Again, when you dig deeper, you find out in order to actually be able to cut fabric, you have to buy their Clean Cut Fabric Interfacing and first apply it to the fabric. The cost: $8 for a 36"x17" piece. So, if I was doing a large project—like a queen size iris quilt—this would add more than $16 a yard to the material cost.

And, I don't particularly want a permanent interfacing on the back of the fabric. I need to be able to turn under 1/4" around the edges to sew down the piece. Though, I have not purchased the $8 fabric interfacing Silhouette sells; maybe once you're done cutting the fabric it will remove easily. I don't know. I'm getting so I don't care enough to try and figure it out.

So, there you have it. The Silhouette Cameo is not a magic machine that cuts fabric and reusable stencils. If you want to cut paper products and one-use stencils (and are willing to pay their high cost for their vinyl), it is an amazing tool! Mylar or fabric, not so much.

This stupid thing could very well end up on craigslist shortly. I am so disappointed about wasting more than $300 (including the software upgrade) on it.

And I'm sorry about the rant for folks who have NO interest in this machine. I'm mostly frustrated because I spent so many hours researching this before I bought it, but the information just isn't out there about what exactly it would and would not cut, so I felt a need to share my results which differed so much from those implied in other websites and chat forums. Maybe I can spare some future person from the disappointment.

Update later: I have had somebody tell me that I should have done more research before trying to cut fabric. Well, I'm not sure what further research they wanted me to do. I read the manual that came with the machine and it did NOT provide any information on cutting fabric nor did the Cameo website. Why should I rely on other bloggers to tell me how to use it? How am I to know which folks got their machines for free and are therefore biased? I am not in the business of selling Cameos, so I do not apologize that I might be harming their sales by advertising my failure to get their machine to work. If they'd like me to remove these posts, then they can take my machine back and refund all of the money I wasted on it.