After very many failed attempts, I have nearly come to the conclusion my new Silhouette Cameo will etch mylar, but not cut it.

Today, I first tried feeding in the mylar by itself and the machine actually did a pretty nice job cutting it. But it became clear pretty quickly why you need a backing material on the plastic: The cut pieces started to separate and stick out and the mylar would not have fed properly when it was rolling back and forth cutting the design, so I stopped the project in the middle. Here is that attempt. 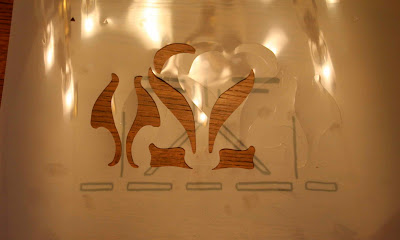 So, I gave the cutting mat another try. After a couple failed tries, Jeff suggested I try cutting a small design (Duh!) so I created a small stencil design from our dining room curtain project. (And I'll say it again, the software is great!) 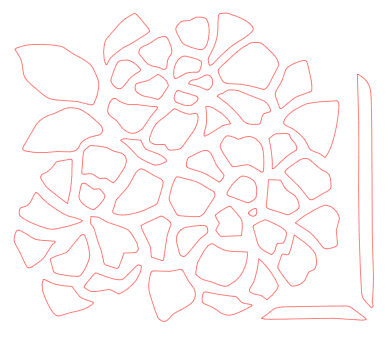 I tried cutting this out eight times, each time adjusting the blade depth, material thickness and other settings. Luckily, I did minimize the loss of mylar by moving the image around on the sheet, using different corners for each attempt.
I'm pretty sure this is 7mil mylar, which I purchased from StencilEase last year.

Amy Miller, who published Stenciling the Arts & Crafts Home, recommends stencils be cut from 5 to 7mil mylar, so I will probably try and locate some thinner plastic. I found a blog post from one woman who successfully cut plastic purchased from JoAnn's, so I will probably go and pick up some of those sheets and see if they'll work.

I did receive the vinyl I ordered, but the stuff is crap; it is tissue thin and only good for one use. And it's expensive—$15 for a 3-foot by 9-inch piece. That's not at all what I'm interested in using. I'll save the stuff for sometime when I don't care about it being destroyed after one use.

Posted by Sharon Kwilter at 7:02 PM