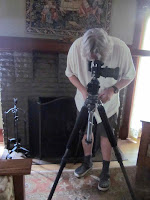 The photo shoot yesterday went well, I think. Since he gave me permission to share, Alex Vertikoff is the photographer who came out. I don't know why I didn't think to take more pictures yesterday, but I only have one lousy picture of him where you really can't recognize him.

His process was very different from the photo shoot our contractor did. Our contractor came in and took all our stuff out of the rooms and put in his (which is part of what I hate about the pictures).  Mr. Vertikoff did not "stage" much of anything. Occasionally he would rotate something in place, or move a chair over a few inches, but he pretty much left our stuff as is. It was nice that he actually liked our tapestries and so took photos of rooms oriented so they'll appear in many of the photos. He also didn't turn on a single light fixture and yesterday was unseasonably overcast so the light in the rooms was not good. But he has an amazing camera and tripod and he shot with very long exposure (like on the scale of minutes).

He took quite a lot of pictures then he apparently takes all the photos back home with him where he does his photo editing magic. I am really looking forward to seeing them someday. I have no idea when or really if the pictures will be used, but presumably because Mr. Vertikoff took them if they turn out, they'll eventually will be used for something to promote bungalows.