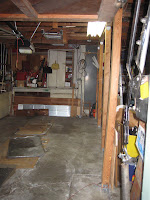 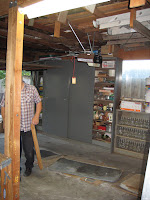 Last night my Dad and his wife, Maxine, came and helped us clean out the garage some more. We made some great progress! Once my Dad takes his car later in the year, we may actually be able to move our stuff over from storage and stop paying that expense. This is the first time in a very long time, you've been able to walk from one side of the garage to the other! We've still got a large pile of garbage to dispose of (in the backyard), and a few things to sell on craigslist, but there's not really much left to do. 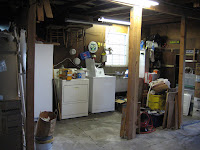 After going to the dog park this morning, I spent some time posting a number of free ads on craigslist. My grandmother was quite the collector of mayonnaise jars and coffee cans. We were going to recycle them, but I decided to post a free ad on craigslist and see if anyone wanted them. We already have people scheduled to come pick them all up soon. And I've got a taker for the last 240 canning jars, but they won't be gone until early next week. We're making good progress!

I still have a cabinet out there full of "vintage" stuff that I need to go through, but that project can wait until it's cooler out. =)

I've also spent about three hours working on the lightning quilt. I've got 30 blocks complete and another 10 fairly close. I may actually have enough squares cut out to finish. I'm hoping to finish this project up by the end of next week.
Posted by Sharon Kwilter at 4:46 PM