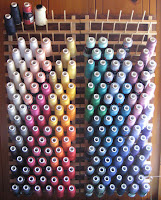 We've plugged away at our to-do list today. Many of the outstanding projects were to the stage where I wanted Jeff's help to finish them. Jeff started with hanging my serger thread racks. They are actually installed on a stained piece of plywood and then that is screwed in only two places to the wood panelling. I couldn't bring myself to put a dozen holes into the wood panelling. And then Jeff thought it would be neat to arrange the serger thread in diagonals, so I just let him put the thread up in whatever arrangement he preferred.

And, finally, we have gotten the sewing room Roman shades hung! I'll have to take a picture tonight when it's dark so you can see them better. Though, I do like the "stained glass" look during the daytime. These were a pretty fun project. I'm glad we didn't buy the $20 plastic ones JCPenney was selling. Though, I would have to admit we spent more than that, by the time we bought all the materials. But I am much happier with this result. 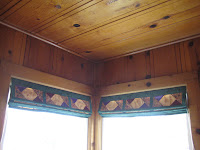 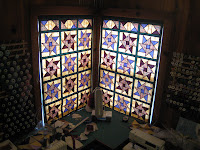 Besides rigging up the Roman shade with the cords, I have been plugging away at the lightning quilt. I spent a couple of hours cutting triangles and probably another hour sewing them together to make the little squares. And now I'm trying to assemble the large blocks. I'm trying to see where we are on quantities before I spend too much more time cutting. I don't want to cut too much.

Jeff and I are both feeling very tired this afternoon. He's off to take a nap; I'll just have to get to bed earlier tonight. I think I'll go do some more mind-numbing sewing on the quilt. =)
Posted by Sharon Kwilter at 4:00 PM