Jeff and I had a quick visit with his parents and sister.

We left Friday late morning and it took about seven hours to get there. We goofed off too much on the way; we stopped at too many fruit stands and, so, unfortunately we got stuck in the absolutely horrid L.A. Friday night commute. It took us two hours to go the final 40 miles. 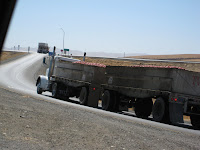 I was surprised at how many trucks filled with tomatoes we saw during the trip. I kept trying to take pictures but we were all moving so fast.

We helped Jeff's mother, Marianne, pack up all of the their bookcases and sift several boxes. We brought home a secretary that we used to have in our house in Oregon and a few other boxes of stuff from Jeff's parents. Not sure where we're going to put it all.

Last night we got to visit Jeff's sister, Joy, and her family; we saw three of her six kids. It was nice to visit them all again; it's been so long. Her 13-year-old son, Jeremiah is absolutely huge. He's probably more than six foot tall and he's got the build of a football player.

We also dropped by Brad and Marianne's new retirement community and wandered around to see their new digs. It looks like a fabulous place to live--it has a craft studio, bistro, library and a lot of other great hang out spaces. I'm hoping we can afford such a nice place when it's time for us to move into a retirement community. They're going to be living across the street from Disneyland! 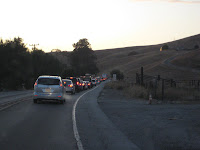 Today was Jeff's mother's birthday so we stuck around until lunch time and went and dined with them. We got on the road by 1:20. We made good time until we hit the narrow portion of Pacheco Pass and there must have been an accident because we practically coasted for several miles.

Luckily, we managed to retrieve Shasta before the 9PM deadline. It's good to have her back.
Posted by Sharon Kwilter at 9:56 PM