Like our last remodel, it's way too easy to keep adding stuff to the job as we go along. Sometimes you add because you discover a problem once you open up the house and sometimes just because you didn't realize you wanted/needed something at the time of the initial planning stages. Yesterday we reached AWA #7. Ouch. 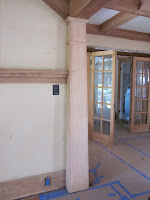 At the beginning of the job, we hired a retired woodworker friend to add columns in the living room at the little parlor area. It didn't go well. While they look pretty good in the pictures, they don't look so good close-up in person. Sharon doesn't want to disrespect the friend who put them in—he actually did a nice job for never having done this kind of work before, but we ended up spending more than $1000 on these two columns and they look like a DIYer project. Sharon was pretty disappointed.

When Wade visited last week, after he got home from his traveling, he said he could build us nice colonnades. We finally caved and added them to this job. 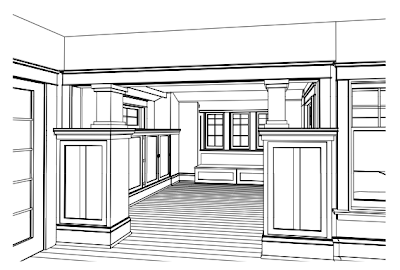 These photos don't show doors on the front side but they'll be added. Wade didn't realize the existing bookcases had doors because they were off being dipped. They'll be adding doors that match the existing and will accept glass panels. They won't be providing the stained glass panels. We'd better start getting busy playing with glass! =) 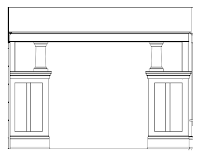 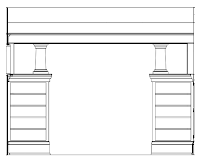 The other AWA we added recently was a roof over the back door stoop. The brackets will be cut to match the existing brackets at the roof line. This will make it much more pleasant to come into the basement when it is raining. 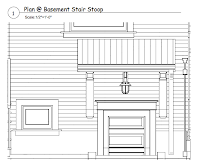 Posted by Sharon Kwilter at 8:47 AM