The paint stripping team declared success on the front of the parlor. 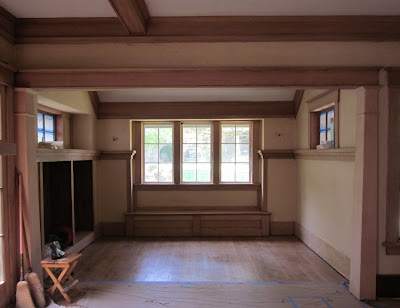 They worked very hard to sand down through the nearly-black stain and dig white paint out of crevices, but there is only so much they can do. At this point, we'll stain and see if any paint shows through and touch it up. We can't strip the inside of the bookcases down to bare wood because they are fir bead board. The inside of the bookcases will just be a little darker than the rest of the room; once they're full of books again, we probably won't even notice. 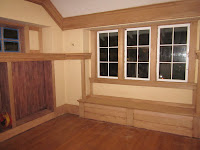 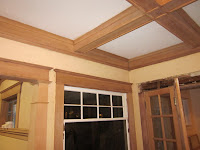 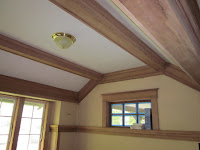 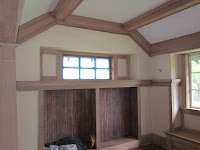 The windows that still have white paint on them are going to be removed and dipped or stripped on-site; we're still looking into the options. They also didn't finish stripping the small windows with blue tape because it turns out we'll have to replace the sashes because we couldn't put storm windows over them. (We're keeping all the windows that will accept storm windows, but the rest are being replaced.)
The rest of the living room is also nearing completion. 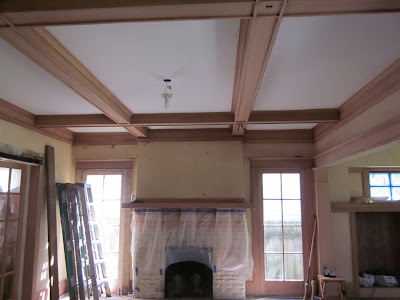 We've found a bit of damage that needs to be repaired. There is water damage to the door at the left of the fireplace and quite a lot of the baseboard is pretty beat up or patched up. We'll have to replace most of the baseboard in the room. We're having a hard time imagining what they were doing to damage the baseboard like this? 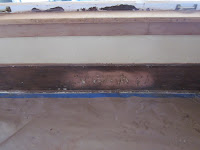 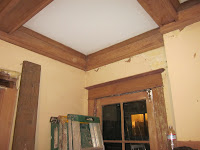 We are not going to strip the fireplace brick. We really don't like the bumpy fireplace brick to begin with, so it hardly seems worth a fortune to remove the paint. We are instead going to paint it another color—maybe gray, because that's the color of the brick, or tan—and call it good for now. That's a project for the future after we have jobs. =)
Also, we've decided to spring for the extra $600 to get the wiring for the lights back in the box beams. This is likely our best opportunity since we surely won't want to open up the ceiling later on.
Today we have to work on emptying the last of the boxes out of the dining room. When we both got sick four weeks ago our move-out came to a halt, but now we have to get restarted on our efforts to empty the space. The paint stripping team will probably get started on the dining room next week.