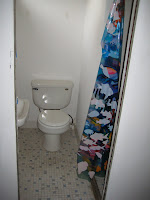 Our basement bathroom remodel did not go smoothly. Nothing in the room went as planned. Before the remodel, it was this tiny nook in the back corner of the basement. It was dark and a little gross.

Here are the before and planned after floor plans. Once the chimney was removed, the bathroom could expand into the original square space and we would punch out the shower into the basement proper. That was the plan anyway... 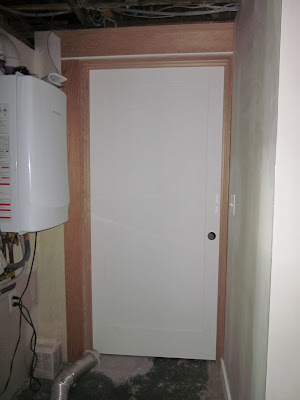 Once the crew got into the structure, there were some problems. First, there was this big header beam right where the shower was supposed to be. Oops. That ended up shifting the shower over about 6", which then threw off all the adjacent doorways and the nice tile plan. Second, the plumber said we had to reverse the sink and the toilet.

While we had originally been hoping to use salvaged fixtures down there, Sharon was obviously too picky because she didn't find anything satisfactory when we went shopping at the salvage places. Also, she had expected to put in a more-period pedestal sink, but then realized there was absolutely no storage in that bathroom, and no space to add any, so decided we'd better go with a sink in a cabinet.

At the time during the remodel when we were supposed to be making all these decisions, we were in school and also both sick! So, we simply asked CDR to skip installing the toilet and sink; we still wanted them to finish the shower. But what they heard was "don't finish the bathroom," so they pulled all of the finish out of the job. Imagine our surprise at the end of the job when after the tile and trim they say they're done. You are? But, what about our shower?! 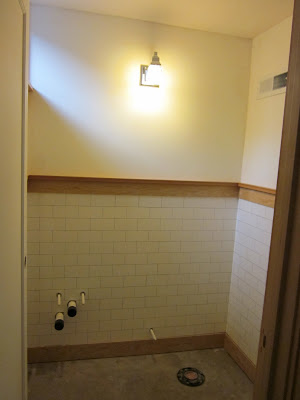 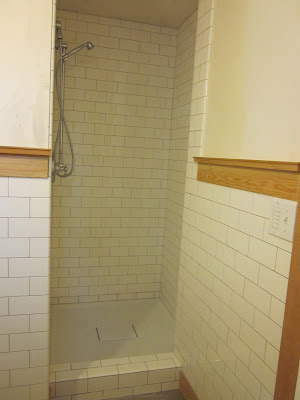 As we talked out the resolution, they were good sports. They allowed us to add back in the shower door installation at cost and we went with the cheapest bid. That was installed today. It's not gorgeous, but it will do. 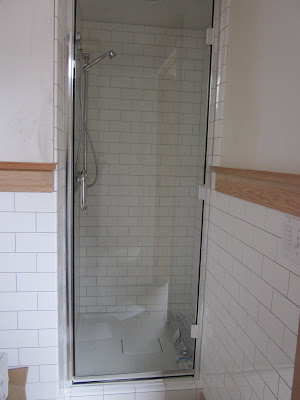 We would also provide the rest of the hardware, i.e. the grab bars and whatever other shower accessories we needed. Those were ordered and we received them last week. They're just waiting for the install.

As for the rest of the bathroom, we've had time now to think about our plans. Sharon has been poking around looking for a vanity with a craftsman look that will blend with the rest of the woodwork in the house. We don't need it to match, but we would prefer stained wood over painted. Actually, Sharon found an acceptable one online with a craftsman feel on a really good sale—but by the time she got around to trying to order (a couple days later) it was gone. She had not realized it had been discontinued and they were clearing out the end of their stock. Oh well.

While ordering the rest of the hardware for the bathroom, Sharon went ahead and ordered a new Toto water-efficient toilet, a matching undermount sink and Kohler Fairfax faucet. She also found an amazing deal on a stained wood toilet seat and ordered that as well. We still need to figure out the cabinet and countertop. Maybe we'll still find something at a salvage place; we'll keep looking. 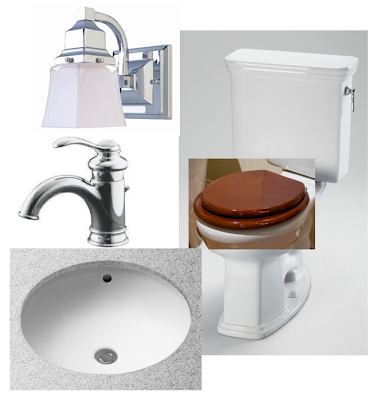 Today, Jeff successfully bought an inexpensive Marmoleum remnant off craigslist large enough for that bathroom. We're not sure what the color is, maybe Van Gogh or barley, but it will do. 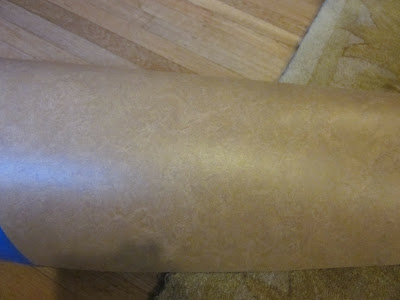 So, yet another winter project for us!
Posted by Sharon @ Laurelhurst Craftsman at 5:31 PM