Sharon found herself upstairs this morning and was clearly channeling her inner perfectionist as she found herself going back over the woodwork again removing spots of paint in crevices.

She also decided the door jamb probably wasn't going to look good once we stained the interior of the bedroom. We had removed part of the paint, but had left some of the exterior hallway side still painted. But we had stripped too much. The stain would have extended out past the closed door. So there was only one thing to do—strip more woodwork. 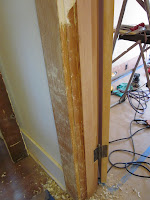 She discovered one new problem pretty quickly. Our upstairs now sports a number of wired-together smoke alarms. Heat guns and smoke alarms don't pleasantly mix. If we don't figure out some better ventilation, we may have to uninstall these units while we continue stripping paint upstairs. After a couple hours with the heat gun (and the smoke alarms), Sharon decided to call it a day. Hopefully to resume tomorrow. 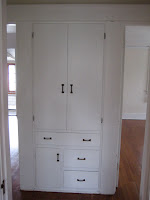 Though, before she quit, she couldn't resist checking out the wood underneath the paint on the linen closet at the top of the stairs. Yup, it's douglas fir.

Those big doors though aren't original. The doors that once hung there were inset. (You can still see the outline of where the butterfly hinges once were.) So, maybe we'll try to replace the doors someday. But not this year. For now, we'll probably strip what's there and call it good.

Posted by Sharon Kwilter at 9:35 PM