I decided I wanted to make new cushions for the cool morris chair we bought five years ago. Yeah, it's been sitting around in our living room for five years in an unusable condition.

Anyway, late last week I went into my sewing room to sew and it was such a huge mess I couldn't do anything in there. Everything was covered in a thick layer of grime, there were probably four projects piled on top of each other, and there was so much junk stashed in there it was hard to even get around. I had to spend an entire day just cleaning up the room. 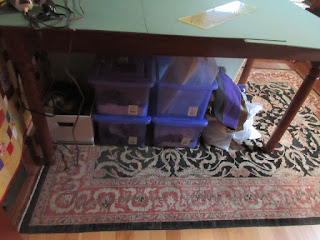 Once I organized my in-progress projects into tubs, evicted the non-sewing room junk, and wiped down the grime, the room was much better.

I finally repainted the damaged frieze. The plaster popped out a piece when the bathroom was demo'd and then we asked our plaster guy to patch it when he came out to surface the bathroom walls, but I had never gotten around to touching up the paint. 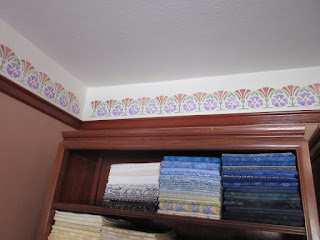 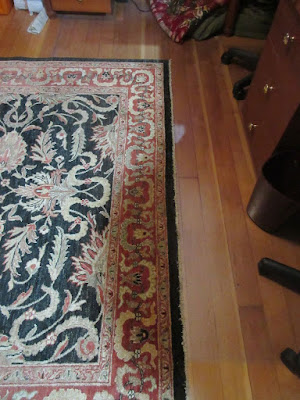 And I've also been meaning to show a photo of the floor mat. When I wrote about it before, it was still curled from shipping. It flattened out nicely and I've been really happy with it.
It took me about four days to finish cutting the foam and sewing the cushion covers, but I did finish them. It was not the most fun sewing project I've done because it was a struggle sewing so many layers of bulky velvet, but I'm glad to be finished. I will show photos of the finished chair maybe tomorrow when I have a chance to take a photo during the day.

And, since I had a few hours to spare this evening, I pulled out the curtain project again. Yeah, another project I abandoned unfinished for way too long. I was wondering why I abandoned it back in April and then I remembered that my sewing machine had died and I needed to take it in for service and by the time I got it back I had basically lost interest in working on it.

Hopefully, when I get burned out on writing in November, I'll go work on piecing squares for my curtains for a few hours. And, now that it's November, Jeff and I will be turning our attention to participating in NaNoWriMo. Wish us luck! 😈