I am finally trying to deal with some ancient unpacked boxes. Nearly four months ago, when we were setting up those shelves in the storage area of the basement, Jeff hauled up quite a few boxes into the living room for us to sift. Sadly, they have sat there ever since. I opened one of them once before and took one look at the scary stuff in it then promptly made a beeline in the other direction. But now I'm trying to get that library area space cleared out so we can spend November hanging out in there writing for National Novel Writing Month. So, I am sifting.

We are finding all kinds of "treasures" from my Grandmother's house. 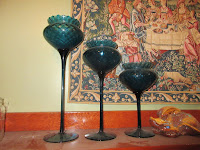 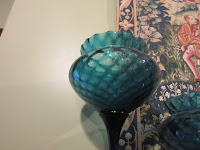 I'm guessing these are candleholders, but they're really large. They'd probably hold some pretty wide candles. The glass is pretty though. I'm not sure what I would do with them. I have no idea how old they are. I may have to try selling these on eBay. 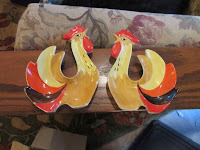 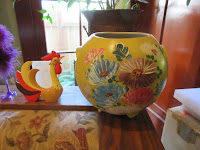 Rooster napkin holder and spoon rests, I believe. My brother actually wants these. 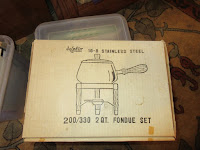 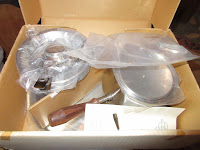 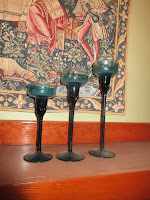 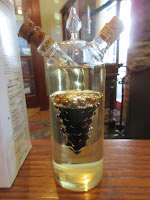 The container on the right was sort of an interesting oil and balsamic vinegar dispenser. It came from the store filled, but it's probably 30 years old by now. Not sure how I would clean it. 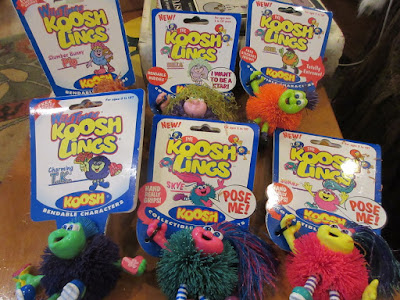 I cannot blame these on my grandmother. At some point I obviously decided I needed a set of Kooshlings. Unfortunately, I didn't need them enough to actually play with them. :(

There's more stuff, but it's not particularly picture worthy. I'm trying to figure out the best way to find a new home for this stuff and it's not fun.
Posted by Sharon Kwilter at 1:22 AM